When endeavoring to judge the merits of a soundtrack album, there’s always the quandary of what measure to use. Should one judge it on the merits, strictly as a thematic collection of songs? Or measure it as an audio companion to the film? With regard to CBGB: Original Motion Picture Soundtrack, I’m going with the
Read More
Note: be sure to read all the way through; there’s a new Monochrome Set DVD reviewed as well. The Monochrome Set were one of those bands who never broke stateside. Though they enjoyed critical and (limited) commercial success in their native England, in the USA they were all but unknown. With a style that seemed
Read More
It was 1980. I was all of sixteen, and enrolled in a private high school that had only gone co-ed the year before I started 9th grade. I lived in the white-bread suburbs of North Atlanta, and my idea of going to “the city” was getting my Dad (or one of my friends’ dads) to
Read More
One argument that’s endlessly trotted out is that 70s punk rock – especially the UK version of it – was a musical reaction to the self-important, overblown pomposity of much of that era’s arena rock. And while there’s an element of truth to that argument, many of the punk wave’s best acts were unafraid to
Read More
Rock’n’roll doesn’t have a long list of successful male-female duets; at least not ones that, y’know, rock. Other traditions have done well with the duet format: Porter Wagoner and Dolly Parton, Johnny Cash and June Carter Cash, the one-off Frank and Nancy Sinatra duet, and others. But when it comes to hard-driving rocking, there just
Read More
I don’t pretend to know much (or anything) about the Toronto music scene. But I feel safe in my assertion that The Scenics aren’t typical of whatever it sounds like. With a country-punk vibe that owes as much to Johnny Cash as to The Replacements, The Scenics are in fact a highly-regarded punk band that
Read More
When The Moving Sidewalks are mentioned at all, it’s general in the context of them being a forerunner of ZZ Top (guitarist Billy Gibbons fronted The Moving Sidewalks). But the Texas quartet deserves more than a footnote in some ZZ Top essay; the group’s music is of a piece with other sixties Texas bands of
Read More
Way back in 1981, a bunch of L.A. scenesters put together a compilation album called Hell Comes to Your House. The now-rare (I have a copy!) punk/proto-goth/death-rock LP featured tracks by eleven local acts, none of whom had made the big time at that point. To modern audiences, the most familiar names on the record
Read More 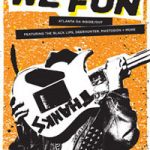