“Ever get the feeling you’ve been cheated?”

With that question posed to an audience at San Francisco’s Winterland on January 14, 1978, visibly unhappy vocalist Johnny Rotten (neé Lydon) ended his tenure with the Sex Pistols. Not counting relatively brief reunions in 1996 and 2007, that gig marked the effective end of the band, though the three remaining members (guitarist Steve Jones, bassist Sid Vicious and drummer Paul Cook) would continue for awhile without Rotten, taking part in a largely ill-advised film venture that yielded The Great Rock ‘n’ Roll Swindle.

None of the Sex Pistols was known as anything like an instrumental virtuoso; the most talented musician in or around the group at the time was original bassist Glen Matlock; as the story went at the time he was sacked after admitting an affection for the music of the Beatles. (That tale, like most others coming from the Pistols’ cynical, self-styled svengali Malcolm McLaren, was a fabrication.) 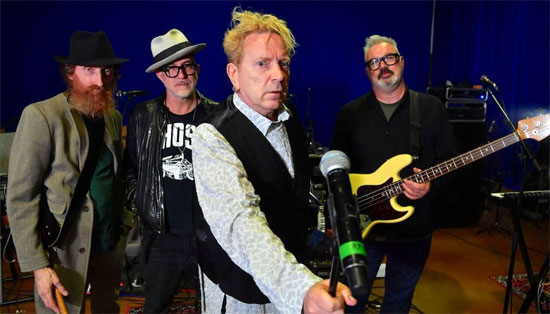 After the implosion of the Sex Pistols, few expected great things from any of its former members. So it was quite unexpected when the member of the group who – it seemed – didn’t even play an instrument surfaced with a new band. That group – Public Image Limited, often abbreviated as PiL – would go on to release eight studio albums and two live albums. With constantly shifting personnel, and Lydon as the sole constant, PiL was active from 1978 to 1992. The band went inactive for 17 years, returning in 2009.

Since coming back together, the group has released two more albums (This is PiL in 2012 and 2015’s What the World Needs Now…) and has enjoyed a stable lineup. Backing Lydon are guitarist/keyboardist Lu Edmonds, bassist Scott Firth and drummer Bruce Smith. Both Edmonds and Smith had been in pre-hiatus lineups of PiL as well. 2018 sees the release of a documentary film and six-CD career retrospective, both titled The Public Image is Rotten. In October, the post-punk group embarks on a North American tour. An October 10 date at Atlanta’s Variety Playhouse was the second show in an 18-city run.

Public Image Limited’s 1978 debut album was abrasive and unfamiliar-sounding; it didn’t follow on from the sound of the Sex Pistols. Lydon’s caterwauling seemed anything but commercial; still, the single “Public Image” reached #9 on the UK charts. But Warner Brothers Records decided Public Image: First Issue was indeed too uncommercial for American audiences, and canceled a Stateside release.

Today the album retains much of its power, but – like Never Mind the Bollocks, Here’s the Sex Pistols – it sounds a bit less revolutionary. That may be explained by the fact that many other groups took influence from PiL and recast it in a more commercially palatable form.

Lydon would agree. “Everything I’ve done has been copied two or three years later, watered down, filtered, put through a wringer and then became acceptable,” he says. “If that’s what people like, then that’s fine. At least I’m influencing music in a positive way, even though to me the results from lesser bands are negative.” He grudgingly admits that those “lesser bands” nonetheless represented a step in the right direction, “explor[ing] the possibilities of sound and not limiting it to categories.” He calls that musical pigeonholing “the biggest shaming, damning factor of modern pop music. It’s accepted as manifesto, but it’s not their creation and we shouldn’t adhere to it. It’s like politics: ignore the lot of them and we’ll be a lot better off.”

If there are clear antecedents to the music of early (and even later) PiL, some of them are found in reggae. Lydon bristles at any suggestion idea that Public Image Limited is a reggae group. “That [idea] was masterminded by idiots in the British press,” he hisses. “They’re responsible for some of the most inaccurate statements ever made in music. The British music media is astounding in its ignorance.” But Lydon freely and proudly admits to reggae’s influence, as well as other inspirations like pop music and even Jimi Hendrix.

“I was brought up in reggae,” he says. “It’s a natural background to me. The place I grew up in, Finsbury Park, is a melting pot; there are so many different cultures there. Greek, Turkish, Irish, Jamaican, African, Muslim … English, even.” He’s adamant that PiL’s embracing of reggae textures – most obviously in original bassist Jah Wobble’s dub approach to his instrument – is not cultural appropriation. “Reggae as much belongs to me in my childhood as anybody else. And maybe that’s a lucky mixed bag of affairs.” He does warn against others doing it, though. “If you don’t come from an area like that, then don’t try to dabble with it. You have to have a cultural rooting in it really to be able to understand it au naturel,” he says.

Lydon says that the musical distance between the Sex Pistols and Public Image Limited isn’t something he consciously set out to create. “That’s just the way it twisted and unfolded,” he says. “When I formed PiL, nobody was really expert at anything. But what we wanted to do was have our own voice, and the very first song that we came up with in rehearsal – which was quite an amazing feat I think – was the ‘Public Image’ song.”

From there, the group realized it could, in Lydon’s words, “take the bass to different places, study rhythm guitar to an exciting conclusion, and I could shape-shift my voice.” That last item came as surprise to the man who had previously vocalized tunes like “God Save the Queen” and “Anarchy in the U.K.” “I thought I was fairly limited to a Sex Pistols/Mr. Rotten thing,” he says, adding pointedly that the style of singing is one “that Oasis has so fondly explored.”

The original PiL lineup fell apart quickly. “It’s a shame I couldn’t keep them together as a band,” he says, with a touch of wistfulness in his voice. “I think the best music comes from people who haven’t over-studied it and are not lost in the manuals.” Lydon blames the record company “and resentment of unknown entities that I was working with. That was a continual problem, and has been ever since.”