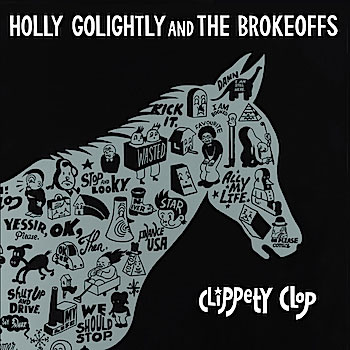 British-born Holly Golightly was an important part of the UK garage-punk scene of the 1990s. Today her music effectively combines that foundation with a sound that draws equally from classic American country and western music. Her latest album, Clippety Clop, was created in her well-established way: working with life-and-music partner Lawyer Dave, Golightly recorded the thematically unified set of tunes in the couple’s garden shed on their property in rural Georgia, not far outside Athens. They made the album in spare moments between caring for the horses on their rescue farm.

Bill Kopp: How important is it to you to get a particular production vibe?

Holly Golightly: On a long player, I really like to try to adapt each track so that you don’t have two things that sound similar back to back. If you were to listen to one track in isolation it wouldn’t be that noticeable, but when you notice the atmosphere change on every single track then it’s kind of noticeable. I suppose it’s like a trademark, really, and it’s what I’ve done ever since I’ve begun making records.

“Pinto Pony” and “Black Horse Blues,” just to name two, almost fall apart; I mean that in a good way. Those songs made me think of what it might sound like if Alex Chilton or Johnny Thunders went country-blues. Do you just roll tape and go with the first take, or do you agonize over getting it right?

Well, Dave has a very different approach to recording than I do; he’s much more thorough than I would be. So it’s a compromise really, especially when it comes to vocals. Not so much with the backing tracks, but when it comes to vocals I don’t think that doing something over and over again necessarily makes it a better take. I think it makes it a different take, but I don’t think it makes it better. What you should try to do is sort of familiarize yourself with how you’re going to do it ahead of time. So quite often I’ll just be singing along in the car to backing tracks for a few weeks before I even go in there to do a take. And then when I do, I’ve got my vocal acrobatics all figured out. Usually I am a one-take wonder—that is the truth, where I’m concerned—because I don’t think you’re trying to make something that’s necessarily perfect, because nothing is. What I think you’re trying to do is catalog a moment in time.

In what ways do you think that living in rural Georgia informs your music?

In no way at all.

Not to belabor the point, but do you think that your being British colors the Americana influences in your music at all?

I grew up listening to radio in England, and all the ‘60s beat groups were doing Arthur Alexander covers for their first albums. So it’s not alien to me, actually; it’s much more familiar to me than say something that was a little bit more contemporary and British I don’t know anything about. I only know about American music of a specific era and of a specific genre; I’m very narrow-minded when it comes to music, actually. I’m the worst person to speak to about it, because I don’t actually like most of it! So I think being British means that I don’t have a reverence for it that perhaps others have. I think I come at it like, “Oh, I’ll have a go at that; I’m game.” I do it and then people say, “Wow, that’s really great what you’ve done with that,” and I’d say, “Well, I didn’t really think about it that hard. I opened my mouth and that’s what came out.”

Do you road-test the material before going in the studio?

Usually the way it works is we record something, and then we learn it to take it on tour. And then by the end of the tour it sounds absolutely nothing like it did on the record! Which is fine; we’re not trying to replicate it. It’s like, “this is a song that we did and it goes like this,” and as long as we stick with the bare bones of the song it can really develop after playing it every night for six weeks. We drop the bits we don’t like, and we flourish the bits we do like.