In 2013, there aren’t all that many bands making progressive rock of the sort that walked the Earth in the first half of the 1970s. But while the popular thinking is that punk killed off prog, that simply didn’t happen: it merely went back to being a slightly underground movement – as did punk, really
Read More
The whole so-called “paisley underground” scene happened during my college years. Like many of my generation, I had expanded my listening experiences beyond classic rock into what would eventually be known as “college rock.” And through my experience working in a record store, I was exposed to even more then-current music, much of it –
Read More
Here are four more capsule reviews that fulfill my twin goal of (a) clearing off my desk and (b) getting the word out about some music you’d almost certainly otherwise miss. Today’s selections are of a progressive bent. As is my standard procedure, my self-imposed limit for this particular exercise is 150 words on each
Read More
Once again, it’s time here at Musoscribe World Headquarters for a batch of capsule reviews. The inbox keeps growing, and some worthy titles have begun to gather dust. So to winnow down my backlog and get the word out about these (largely under-the-radar) new releases, here is the first of three more in my occasional
Read More
During the first four or five years of this new century, there existed online a thriving collector/trading community, dedicated to sharing and disseminating obscure, forgotten and occasionally never-known-about-in-the-first place music from the 1960s. Operating right on the edge of copyright law (well, on the wrong side of it, if truth be told), these collectors shared
Read More
In terms of delivering new music, Drivin’ n’ Cryin’ is employing a strategy not unlike that of Marshall Crenshaw. Instead of releasing an album after a couple years’ wait, both acts are meting out new music in smaller, EP-sized bites. From a marketing (or fan relations) standpoint, this is a solid approach; it keeps the
Read More 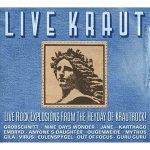 I discovered this internet thing about nineteen years ago. Ever since then – more so once I became Editor in Chief for a now-defunct print magazine, and even more so in the last four years since I launched this blogzine – I have connected with all manner of new and wonderful people. I’ve made friends
Read More
Here’s another installment in my occasional series of capsule reviews; this time ’round I’m focusing on new releases from long-established artists who nonetheless aren’t quite household names. My self-imposed limit for this particular exercise is 100 words on each album. House of Love – She Paints Words in Red If you love the jangle of
Read More
In and of itself, eclecticism is neither a good nor bad characteristic. Consistency may in fact be (as Ralph Waldo Emerson sorta-said) the hobgoblin of a little mind, but it helps sell records. People like knowing what to expect. Not everyone wants adventurism with their rock’n’roll. But some of us welcome the musical curve ball.
Read More
You know what’s cool? When the compiler of a collection of music makes no outsized claims of cultural import about the music. Sometimes it’s art, for sure, but sometime, it’s just…fun. That’s certainly the case with Rock Beat’s new Pulp & Pop Culture Box Vol. 1. One hundred-plus tracks filling four CDs, it’s jam packed
Read More