A Look Back at Pink Floyd’s ‘More’ Soundtrack (Part 2) 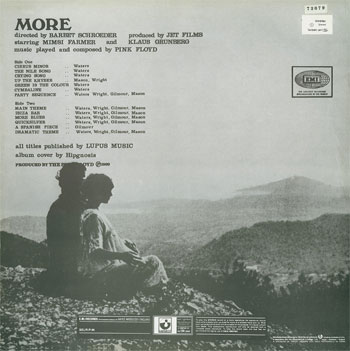 Side Two of the original More album opens in grand fashion with “Main Theme.” The gong would become an integral component of Pink Floyd’s live set as well as its studio recordings, and the gong that opens “Main Theme” provides a dramatic introduction to the number. Richard Wright plays a series of dissonant chords and melodic lines on his Farfisa; it is only with this song that the experimental side of Pink Floyd – so thoroughly explored just months earlier on A Saucerful of Secrets – is displayed on the More soundtrack. But here that experimentalism is couched in a format that effectively reconciles Pink Floyd’s ambitious ideas with conventional songcraft. Built mostly around a single chord, the impressionistic “Main Theme” is more songlike than many other Pink Floyd instrumentals of the era. It shows the band channeling its energies into music that could be considered more accessible.

The opening chords of “Ibiza Bar” are nearly identical to “The Nile Song,” but as the song unfolds, it shows a greater emphasis on melody, and a lead guitar solo from David Gilmour is placed up front in the tune. Even as the vocals come in – buried deep in the mix here – Gilmour’s lead playing continues, and remains the song’s most distinctive feature. For once, Waters’ lyric may have a connection with the film; his lyrics speak of an epilogue that reads like a sad song.

The self-explanatory “More Blues” is a very brief and airy 12-bar blues instrumental. And while Pink Floyd was never most people’s idea of a blues band, 12-bar instrumentals would become a regular part of the band’s live set in the early 1970s. Curiously, Mason’s drums are mixed significantly louder than David Gilmour’s guitar. Waters’ bass and Richard Wright’s organ are subtle almost to the point of inaudibility.

Musique concrète is a kind of experimental music making with beginnings in the 1920s; modern-day listeners might describe it as “soundscapes” or even sound effects. Whether or not the band’s use of it was predicated on familiarity with earlier experiments by composers like Stravinsky, Stockhausen and Varèse, there are commonalities between the work of those serious composers and Pink Floyd tracks like “Quicksilver.” Like “A Saucerful of Secrets” before it, this lengthy and atmospheric piece from the More soundtrack is composed of seemingly random effects amidst more conventional musical sounds from organ, vibraphone and percussion.

The final two tracks on the More soundtrack are examples of writing to specification. Even the titles make that clear: “A Spanish Piece” and “Dramatic Theme.” The former is an exceedingly brief Flamenco piece with Gilmour playing nylon string guitar while whispering Spanish phrases. The More soundtrack ends with a spare tune based on the film’s “Main Theme,” and prominently features David Gilmour’s slide guitar with layers of reverb and echo.

Pink Floyd would write and record additional songs for Barbet Schroeder’s More film soundtrack, though none would appear on the album. Four of these are included in the 2016 box set The Early Years. The verse sections of the short instrumental track “Hollywood” are a two-chord vamp based on the opening chords of “Cymbaline,” and the chorus – a few bars – provides enough variety to qualify “Hollywood” as a separate song. David Gilmour plays a simple, appealing melody on his guitar through a wah-wah pedal. At its core, “Hollywood” displays the bare bones of what could have been developed into a proper song.

A “beat version” of the More theme wasn’t used in the film – nor on its soundtrack – but does showcase Pink Floyd’s ability – largely untapped – to make relatively conventional pop music when the inclination or need arises. Many of the group’s signature sonic qualities – a simple, throbbing bass line, driving yet straightforward drumming, lengthy and exploratory organ runs, chugging electric rhythm guitar, and shifting musical dynamics – are all present in the “beat” version, and are corralled into a catchy tune. 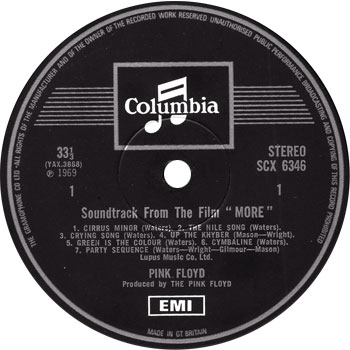 The Early Years includes an alternate take of More‘s “More Blues.” Unlike the take used on the soundtrack, the alternate version is mixed so that all four instruments – guitar, bass, drums, organ – are audible. Still, it’s relatively undistinguished and is notable primarily as an anomaly in the Pink Floyd catalog. “Seabirds” did find its way into the film, but was left off of the soundtrack album. Rather than having a drum beat, “Seabirds” uses the resonating sound of a gong as its percussive device. Wright plays Farfisa organ lines and some subtle vibraphone; eventually David Gilmour adds some slide guitar, used here more for texture than as a vehicle for any sort of melody. Near the track’s end, the gong is struck again, more forcefully, and allowed to ring out completely as the organ lines fade into oblivion.

Looking back on the More album, Nick Mason said, “It wasn’t a Pink Floyd album, but a group of songs.” The band came away from the experience with generally positive feelings about soundtrack work; Pink Floyd would assist Schroeder again on another film (Obscured by Clouds / La Valée), and would team up – albeit less successfully – with another popular filmmaker for a project in 1970.

The More experience had one important benefit for Pink Floyd: it helped break the band in Europe. “The Continent has just exploded for us now – particularly France,” Waters told Georgia Straight‘s Mike Quigley. “What really made it for us in France was the film More.”

The Rolling Stone Record Guide awarded More merely one star, but in his accompanying review, Bart Testa characterized the record’s music collectively as “suggestive of impressionist sketches” and “far more sentimental than the film.” Long hard to find on home video, in 2016, Barbet Schroeder’s More received release on DVD and Blu-Ray in Pink Floyd’s The Early Years box set.

This essay first appeared in Bill Kopp’s 2018 book, Reinventing Pink Floyd: From Syd Barrett to The Dark Side of the Moon, published by Rowman & Littlefield. For more information, visit www.reinventingpinkfloyd.com