A Look Back at Pink Floyd’s ‘More’ Soundtrack (Part 1) 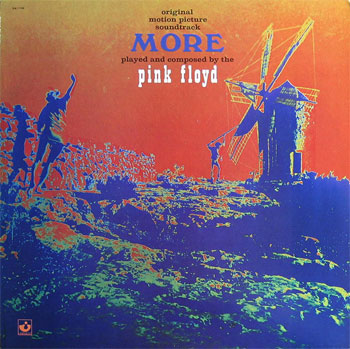 As 1969 began, decisive changes were underway for Pink Floyd. After making two albums and a number of singles with Norman Smith in the control room, Pink Floyd began to move toward self-producing. And having had successful experiences – at least from a creative standpoint – working on film soundtracks, the band decided to plunge ahead and provide all of the music for a major motion picture.

While some recording sessions for the album that would become Ummagumma had begun in January 1969 at EMI’s Abbey Road studios with producer Norman Smith, when Pink Floyd began work on the soundtrack for Barbet Schroeder’s More, the band booked studio time at Pye Recording Studios in London’s Marble Arch district.

In 1969, Barbet Schroeder had already made a name for himself with his production company, creating edgy, well-received films. A dramatic motion picture chronicling the downward spiral of a young man who succumbs to heroin addiction, More would be the directorial debut for the Swiss-born Schroeder.

For the soundtrack of this decidedly downbeat film, Schroeder chose Pink Floyd. Barry Miles quoted the director explaining his choice. “Pink Floyd were making the music that was best adapted to the movie at that time – spacey and very in tune with nature.”As used in the film, the songs the band wrote and recorded are subtle additions; often as not, the songs flit in and out of the soundtrack in the form of sounds coming from a radio. Because a variety of styles would be needed to evoke certain specific moods, Pink Floyd was called upon to create a suitably diverse collection of music. Over a period spanning all of February through May of 1969, the band worked on songs for More in between its now-customary schedule of concerts. For a variety of reasons – owing at least in part to difficulty obtaining overseas work permits – Pink Floyd largely remained in Great Britain during this period, playing at numerous festivals, benefit concerts and other dates that often included several other acts.

The band had a rather short deadline for the More film score, but the movie itself was mostly complete when Pink Floyd set about creating music to accompany the moving images. Nick Mason recalled in his book Inside Out: A Personal History of Pink Floyd that the band “went into a viewing theatre [and] timed the sequences carefully” using a stopwatch. David Gilmour was quoted about the sessions in Miles’ Pink Floyd: The Early Years. “It was eight days to do everything from writing, recording, editing … but everything we did was accepted by the director. He never asked us to redo anything.”

Record-buying fans who had been following along with Pink Floyd’s progress may have been nonplussed as the needle dropped on side one of More. The pastoral opening of “Cirrus Minor” features birds chirping in the trees for a full minute before the first strains of music begin. As he gently strums an acoustic guitar, David Gilmour sings of churchyards, rivers and lying in the grass. Rick Wright’s Farfisa organ has its vibrato setting on full, causing his block chords to wobble in the background. Intentionally or not, the folky “Cirrus Minor” has surface similarities to some of Syd Barrett’s songwriting: the song has no chorus, and it is built on a foundation of descending chords. The vocal section of “Cirrus Minor” ends after a minute and a half; the remaining nearly three minutes of the song feature a stately Hammond organ melody from Richard Wright. Additional organ overdubs toward the tune’s end take on a woozy, otherworldly quality.

“The Nile Song” is a true oddity in the Pink Floyd catalog. With a crushing sequence of guitar chords, the heavily distorted tune – with a heavy arrangement to match – has more to do with the kind of acid rock being churned out by such bands as Blue Cheer on its 1968 LP Vincebus Eruptum. Perhaps Schroeder specifically asked for a heavy rock song to accompany that particular scene in the film, and the band willingly obliged. But the song’s forced, cliché lyrics (a character spreads her wings to fly) coupled with an unsubtle AAA rhyme scheme – eventually scaled back simply to AA – suggest that composer Roger Waters may have been having a laugh. Nearly a half century after its recording, “The Nile Song” sounds like nothing so much as a parody of heavy metal. Keyboardist Richard Wright doesn’t even play on the track. 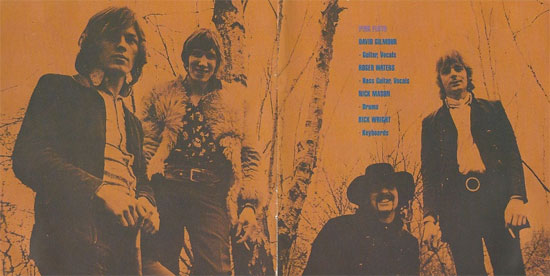 As a song, “Crying Song” is a slight piece of work, but as a hint of directions Pink Floyd would pursue, it’s instructive. David Gilmour turns in a distinctive, unforced lead vocal while Rick Wright adds some melodic vibraphone. Overdubbed vocal harmonies – again from Gilmour – preview what would soon become one of Pink Floyd’s chief musical assets. Gilmour’s electric slide guitar, too, would take its place in the group’s sonic arsenal, but the solo on “Crying Song” seems offhand, as if it were laid down in a single take so that the band could move on to another track. And songwriter Waters – who doesn’t take a lead vocal at all on any of the More songs – clearly still has a thing or two to learn about David Gilmour’s vocal range; the lead vocal line pushes the bass-note limits of Gilmour’s ability.

“Up the Khyber” – the title an example of Cockney rhyming slang (in this case for “up the arse”) – is equal parts Nick Mason drum solo and Richard Wright playing some very exploratory, jazz-flavored chordal runs on an acoustic piano. The song may have grown out of a similar-sounding section in the band’s “Interstellar Overdrive,” and would appear again under a different title as part of Pink Floyd’s 1969 live set piece, “The Man and the Journey.” A dizzying bit of tape manipulation ends the song.

The next two songs on More would provide Pink Floyd with some of its most compelling live material, in greatly expanded and extended versions. But for Schroeder’s film soundtrack, both “Green is the Colour” and “Cymbaline” would be presented in acoustic-based, relatively brief readings. Another folk-flavored tune with a sprightly tin whistle, “Green is the Colour” is built around Gilmour’s acoustic guitar and high-pitched vocal. The rest of the band enters the arrangement gradually, with Wright turning in a country and western-flavored piano melody that begins simply and develops as the song winds out, eventually evolving into a Floyd Cramer-styled solo.

The moody minor key melody of “Cymbaline” provides a suitable backdrop for David Gilmour’s heavily reverberated lead vocal. “Cymbaline” sports one of the strongest melodic lines on More, and, for that matter, in the post-Barrett Pink Floyd catalog to this point. By 1969 Roger Waters was putting more care and effort into his lyric writing, and “Cymbaline” reflects this. The song makes a reference to Marvel Comics character Doctor Strange, and trades in some compelling lyrical imagery (likening the feeling of apprehension to a tube train creeping up one’s spine). And humor makes a fleeting appearance as Gilmour sings a lyric that asks if the song’s final couplet will rhyme. It doesn’t.