I started attending arena-scale rock concerts back in the late 1970s. My first show was in October 1978, seeing Electric Light Orchestra with their hamburger bun/spaceship setup at Atlanta’s Omni. (In the words of Rob Reiner‘s Marty DiBergi character in This is Spinal Tap, “Don’t look for it; it’s not there anymore.) One of the
Read More
Not long ago, a female friend – friend, I say – and I got into a conversation about the runaway bestseller Fifty Shades of Grey by E. L. James. Being a guy, I had only heard a little bit about the book; I knew it was very popular among a demographic one might describe as
Read More
There exists a certain, special sort of concert. And in my experience, it’s extremely rare: the sort of show in which I find myself realizing a mere three, two or even one song into the set that this is an artist I don’t ever want to miss. On those exceedingly uncommon instances, I tell myself,
Read More 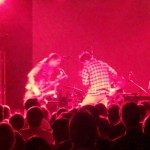 I read a description of these guys that likened their music to house (EDM). And though I can’t find the citation, I’m pretty sure somebody else labeled Moon Hooch as a dubstep act. Now, I pride myself on having pretty wide and eclectic tastes, but mention EDM or dubstep and I reach for my (metaphorical)
Read More
It’s always a tough gig playing as the opening act. It’s even more so when the show is like the one I recently witnessed at Asheville’s Civic Center. First there’s the venue: a sports arena more often home to gun shows and ice-skating (not at the same time!), the room simply isn’t designed for music
Read More
It’s the rare modern act that bridges audiences young and not-so-young. Australia’s Tame Impala is one such act. In the studio, the Australian Tame Impala is essentially one man: Kevin Parker. An unabashed sixties music fetishist, Parker crafts the music (two albums and an EP to date) doing all of the playing, songwriting and singing
Read More
by Annelise Kopp, Guest Blogger “Always in the midst of comedy,” Margaret Cho believes that the art hinges on writing and delivery, saying “there’s not really one without the other.” She also values the different formats that comedy is taking: “there’s a lot of great stuff happening online.” In late January 2013, Margaret played back-to-back
Read More
My firsthand experience with tribute bands is quite limited; in general, the concept doesn’t do a lot for me. While there are quite a few acts touring (quite successfully, I should note) the works of more famous bands, many of them base their stage act on the visual style and cues of the band being
Read More
The Magnetic Fields On one level, the selection of The Magnetic Fields was an odd choice for Moogfest. The group’s music has mutated through a variety of approaches and styles over their 20-plus year history. And according to the bio on the Moogfest site, “Their current album Love at the Bottom of the Sea brings
Read More
Hands-on Moog Exhibit A key component of Moogfest is the showcasing of its namesake’s electronic innovations. With Moog Music’s headquarters and factory a mere few blocks away, it made perfect sense to offer an interactive setup wherein visitors could fiddle around with Voyagers, Little Phattys, Etherwaves, Moogerfoogers and more. Making it even better, participation in
Read More