It’s been 20 years since Interpol released their celebrated debut Turn On The Bright Lights, an album that came at a time when the indie music scene in New York was booming and entering a new sonic era alongside bands like The Strokes, The Yeah Yeah Yeahs, and LCD Soundsystem. Now, in 2022, Interpol have released and are touring on their 7th studio album, The Other Side of Make-Believe. Interpol have historically had a proclivity to lean into their dark, moody, post-punk concept, to the point of boxing themselves in and investing so deeply in their sound that it becomes harder to branch out. 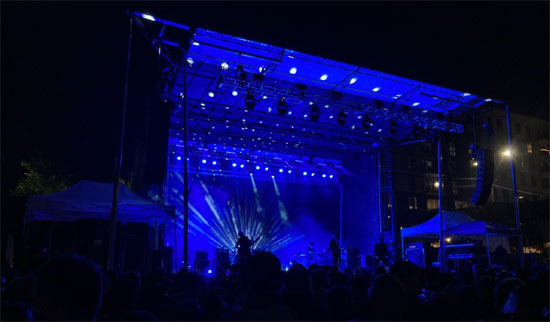 At their September 3rd show at Asheville’s (still relatively new) outdoor venue, Rabbit Rabbit, this commitment to their sound could be heard. Though The Other Side of Make Believe does take some calculated risks, this album largely draws on the sound we’ve come to expect from Interpol, with tight rhythms, heavy basslines, and Paul Banks’ deep voice creating an unmistakable sonic atmosphere. The upside? If you stopped paying attention for a moment you might mistake a new song for an old favorite. While fans of their early 2000s albums may have been disappointed by the lack of older material (they only played two tracks off of their 2002 debut TOTBL), they still managed to move the crowd.

Interpol’s set beginning as the skies were darkening was fitting and helpful for the entire experience, as the lights did some heavy lifting on the visuals front. As a big fan of Interpol myself (primarily logging my active hours as a fan between the years 2002-2007), I still found this an enjoyable show and one I am glad to have seen. — Annelise Kopp