Known for putting on a spirited and memorable show, Spoon’s September 3rd performance at Rabbit Rabbit was alive, dynamic, and tight. The band is touring on their latest record Lucifer on the Sofa, which has received mostly positive reviews 26 years after their 1996 debut Telefono. Since this album is widely considered a return to form (if ever there was a departure), it’s fitting that this show felt so self-assured. The band confidently played cuts from their entire discography and weaved them together in a way that would appeal to fans of different eras of Spoon. If there’s a critique, it’s that Spoon has stayed so committed to their sound that songs can start to run together. 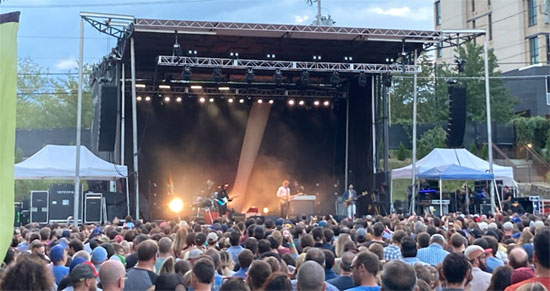 They captivated the crowd with arpeggiated and harp-emulating synths layered with tinny, robotic sounding drum machines on “Inside/Out” (off of their 2014 comeback They Want My Soul). This was a song that felt refreshingly out of character for Spoon at the time of its release but now is one of their best known tracks and one of the most welcome additions to their live set. It broke up what could have become a sonically homogenous set.

Ultimately, this was a career-spanning performance appealing to loyal Spoon fans as well as a lively sales pitch for first-time listeners. Frontman Britt Daniel (the only remaining founding band member besides Jim Eno) was engaging and seemed to be having the time of his life.  For a show with doors opening at 4:30 and a band that played exclusively before the sun set, Spoon brought the energy. — Annelise Kopp