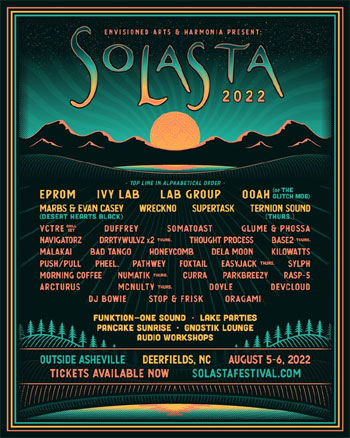 The combination of outdoor camping and musical festivals is a tradition that goes back to legendary events like the Woodstock Music and Arts Fair, held in upstate New York in August 1969. More than a half century later, the music and locations are different, but the freewheeling, communal spirit endures. Billed by organizers as “a left field event for left field individuals,” the Solasta Festival brigs together thousands of music enthusiasts and nearly three dozen cutting-edge acts for two days of music, events, parties and workshops. Held at the Deerfields Retreat near Horse Shoe, N.C., Solasta 2022 takes place August 5-6.

Though part of a storied tradition, the Solasta festival is unique in its character, and in its carefully curated lineup of performers. “We’re all music nerds,” says Hasan Zaidi of Envisioned Arts, the event planning company organizing and co-sponsoring Solasta. “We all listen to a lot of niche, underground artists from around the world.” He says that the acts chosen to perform at the festival represent music “that isn’t normally brought to the United States.”

The music featured at Solasta spans multiple genres, but Zaidi allows that the umbrella term “electronica” is a handy way to describe it. As opposed to high-energy EDM (electronic dance music), the electronica featured at Solasta is often of a dreamier character. “It’s generally bass music, down tempo and glitch,” Zaidi says. “And we’re doing a lot more house and techno this year as well.” Some of the highest-profile acts on this year’s bill include Ooah (of popular Los Angeles duo The Glitch Mob), Nevada-based Lab Group, and Portland, Ore.-based audiovisual artist EPROM.

The Solasta Festival was launched in 2017, and was originally held in eastern Tennessee. But Zaidi emphasizes that from the very beginning, Deerfields was planned as the festival’s permanent home. “We just wanted to ‘scale up’ before we got there,” he explains. “We have folks flying in from all over the country, but the Southeast is our target market. And Deerfields is more accessible.” The festival settled into its new home for the 2019 event, and after a two-year pandemic-related pause, Solasta returns to Deerfields for 2022.

The original inspiration for the Solasta Festival came from full moon parties, a fixture of west coast music culture. “The San Francisco/Santa Cruz region has a history of collectives organizing their own events,” Zaidi explains, noting that those parties are traditionally independent, non-commercial enterprises. “They build their own stages and shade structures, choose remote locations, bring out the sound systems, and have an event under the full moon.” Solasta is an effort to preserve those qualities while transferring them to a larger-scale, commercial undertaking. “We pay a lot of attention to the small details,” he says.

At every step, Envisioned Arts works closely with Solasta’s co-sponsor, Asheville-based nonprofit Harmonia Sanctuary. Founded in 2015, Harmonia’s stated mission is harm reduction, providing “a safe decompression space for individuals undergoing difficult emotional experiences.” Because psychedelic drug use is an inescapable part of the festival experience for many, Harmonia works to ensure the safety of those who over-indulge. 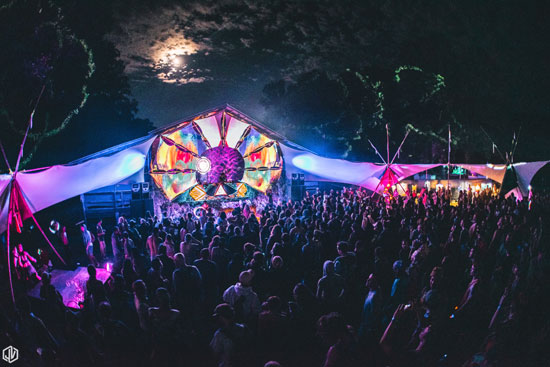 “There’s a huge movement right now to use psychedelics for medicine,” says Harmonia Sanctuary co-founder Maegen Coral. “But [when] people use them recreationally, that can come with a lot of emotional purging and disorientation.” Trained volunteers from Harmonia will be on hand at Solasta to help those individuals in a non-confrontational, nonjudgmental manner.

Beyond music performances extending well into the small hours, Solasta features other interactive events that leverage both the on-hand talent and festivalgoers’ deep interest in audio production. “The artists who are playing the stages also present workshops on how to do sound design,” Zaidi explains. “We have audio engineers from nationally-touring acts present workshops on how to create productions for high-fidelity sound systems.”

Zaidi emphasizes that Solasta workshops are focused on tangible production skills. “Most [other] events around the country are not doing that,” he says. “They’re all doing other kinds of workshops. We are very specific on audio production.”

Yet despite the serious and professional character of the festival’s workshops, Hasan Zaidi says that Solasta is really about human interaction, something that has been in short supply these last couple of years. “I see faces at Solasta that I haven’t seen at any other event,” he says. “In a way, Solasta is a bit of a family reunion. And that’s what I’m most excited for. It’s a conduit for good humans to connect.”