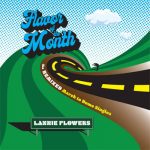 Now and then I receive an EP or even a single for potential review. In general those don’t make the cut, as I prefer to write about full-length albums that provide a fuller picture of an artist’s work. But when a short-form release rises to the level of something special, I’m happy to cover it.
Read More
This week of capsule reviews spotlighting new music wraps up today with five releases that all came to me on vinyl. I love vinyl. Did I mention that I really enjoy listening to music on vinyl? Well, I do. Anthony W. Rogers – Wrong… When this record arrived in my mailbox, I thought to myself,
Read More
Once again, it’s time for a run of hundred-word reviews. My inbox has been overflowing of late, and even after removing the material that I deem not worth my time (nor yours), I’m left with far too many discs to cover in my customary manner (500-800 word reviews). So herewith are twenty-five – count ’em,
Read More
Lannie Flowers‘ vocal style is occasionally reminiscent of John Lennon, and the slide guitar fills he often employs are from the George Harrison school. The Dallas/Fort Worth guitarist is the composer of preternaturally strong, hook-laden pop songs that have equal parts muscle and melody. If there’s a single criticism of his work, it’s that he
Read More
I will readily admit it: I’m a slave to the jangle. Give me a dose of high-energy, upbeat powerpop and I’m yours (musically speaking). And that’s precisely what happened when I popped Circles — the latest CD from Lannie Flowers – into my CD player. Double-tracked lead vocals, trebly Rickenbacker-toned bass lines, Revolver-era musical arrangement
Read More