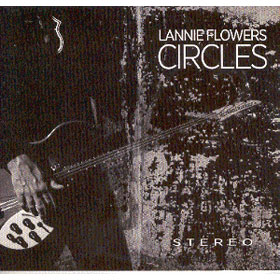 I will readily admit it: I’m a slave to the jangle. Give me a dose of high-energy, upbeat powerpop and I’m yours (musically speaking). And that’s precisely what happened when I popped Circles — the latest CD from Lannie Flowers – into my CD player. Double-tracked lead vocals, trebly Rickenbacker-toned bass lines, Revolver-era musical arrangement and a grab bag (in the best sense of the phrase) of sonic elements make Circles a fun, engaging listen.

Melodically Circles doesn’t trade in a groundbreaking approach, but then that aesthetic is one best left to progressive rock. The melodies on this album all have a whiff of familiarity, and that’s not a bad thing. Shades of 70s powerpop (The Nerves, Van Duren, Shoes) are all over the disc, but the more classic antecedents (the too-oft mentioned early 70s triumvirate) are clear influences too. At times Flowers sounds a tiny bit like a delightful cross between the late (Will) Owsley and fellow Texans Fastball, too.

Lyrical messages like “Turn Up Your Radio” generally force listeners into one of to camps. Either they groan and roll their eyes, or they agree and comply with the sentiment. When it’s delivered as well as Lannie Flowers does here, I fall happily into the latter category. Anybody who enjoys the Spongetones or Tommy Keene (to name two) will find themselves nodding along with these songs.

If you dig this style, by the fourth track (“Not in Love”) you might well wonder if this is a best-of collection; the exuberant tracks are that consistently infectious. Throughout the disc Flowers shows that he understands that the right amount of repetition is an essential component of pop. So while his songs never once beat a melody or hook into the ground, the do sink that hook into the listener’s psyche. And that’s a neat trick that’s harder to pull off than it might seem. On Circles, Lannie Flowers makes it sound easy.

With the exception of drums and a bit of background vocal work, every sound you’ll hear on Circles comes from Flowers himself. Yet the songs have that elusive live-in-the-studio feel, tempered with a careful (yet never fussy) attention to detail. “Around the World” deserves hit status, but then so do most of the tracks on the disc. It’s not all upbeat pop; “Just Like You” is more of a moody midtempo ballad, but it’s on less catchy than the poppier stuff. But more typical is the very Beatlesque “Looking For You,” which sounds like a John Lennon spotlight number. And for equal time, the disc closes with the early 70-Stonesy “Rusty Circles.”

On that — like all the other cuts — there’s a southern tinge to most of Flowers’ arrangements, so powerpop fans should be thankful we haven’t lost him to the bland nether regions of what passes for modern country music. That said, anyone who digs Bill Lloyd (with or without Radney Foster) will not want to miss Circles.

For powerpop connoisseurs, Lannie Flowers’ Circles is recommended in the strongest terms. The rest of you simply have no idea what you’re missing.