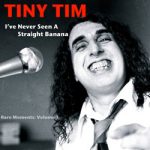 Forget whatever you think you know about Tiny Tim. His cartoonish persona distracted from the fact that he was in fact a great musical archivist, a preserver of some of America’s lost music. “Tiptoe Through the Tulips” is the beginning and end of most listeners’ musical knowledge of the man born Herbert Khaury, but there’s
Read More
After the semi-disaster of Night #2 (I had missed Night #1 altogether) of the 2009 Charlotte Pop Fest, I was left wondering how things would go. Event impresario James Deem had come out onstage part-way through the Friday set to announce to the crowd (well, not a crowd; more like a gathering) that due to
Read More
Icelandic quartet Blindfold offer up a subdued, dreamy mix on Faking Dreams, their first release. The opening track (“Falleg Depuro”, whatever that means) has an appealing verse structure, but waiting for the chorus that never comes is a little unsatisfying. Once conventional expectations are discarded, the album can be enjoyed for what it is. “Sad
Read More
Nina Persson is possessed of a voice that’s at once icy and removed, emotive and sensual. As vocalist for the Cardigans, her pipes floated over their gimmicky-but-good arrangements. But A Camp is a different matter altogether. There’s still that dichotomy, causing tension and resolution on every track. The group’s second album Colonia was released to
Read More
I absolutely love vinyl. And I’m no audiophile; my hearing is quite damaged from thirty-plus years of playing in bands (and seeing the Who in 1980). I dearly value the warmth of the vinyl; that digital stuff is harsh on my ears (man). And I don’t mind the crackle of dirt and dust in the
Read More
Maybe it’s something in the British water. Or, more likely, in their wonderfully full-bodied just-below-room-temperature beer. It must be said: this is pretty derivative stuff. The Pineapple Thief sounds like nothing so much as Porcupine Tree with Steven Wilson replaced by Radiohead‘s Thom Yorke (vocals) and Jonny Greenwood (guitar). OK, perhaps that’s a bit unfair.
Read More
Live in New York City is the first live offering from Blackfield, the collaborative effort between England’s Steven Wilson and Israeli Aviv Geffen. With two albums in their back catalogue (2005’s self-titled album and 2007’s Blackfield II) the time was right to release this concert album, recorded around the time of Blackfield II‘s release. The
Read More
Shout! Factory’s newest retrospective is a CD+DVD package of Otis Redding material called The Best: See & Hear. The “hear” postion of the package is rather short, even by the standards of the good old LP format. Twelve tracks over about 30 minutes is a bit brief, but arguably if your goal is to just
Read More
The Charlotte Pop Fest (September 24-26 2009) was both thrilling and disappointing, sometimes all at once. It’s important to make clear right up front that attendees easily got value for their investment, the lineup was impressive, and the organizers are a dedicated team. But, but. The three-day event organized by Charlotte musician James Deem, sought
Read More
Pop-jazz. Jazz-pop. The labels are mere shorthand for a sort of music that’s tough to describe. The terms can often be applied in a pejorative sense, used to describe (and dismiss) disposable music. But that’s not at all what we have here. Mood Lit, the second album from Brooklyn pianist Jim Duffy, is a delight
Read More