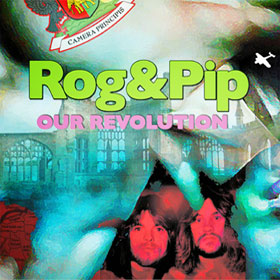 I’ve just stumbled upon what sounds like the greatest album Sweet ever made. The thing is, most of the tunes on Our Revolution have gone unreleased – or have been available only on one-off, Europe-only 45rpm singles – since 1974. Oh, and one more thing: none of the guys that gave the world “Little Willy,” “Fox on the Run” and “Love is Like Oxygen” are on these tracks, and the hit production team of Nicky Chinn and Mike Chapman had nothing to do with the recordings.

And this newly-released album is credited to the duo Rog & Pip. In fact, other than the location (merrie olde England) and the era (the first half of the 1970s), Our Revolution has nothing to do with Sweet. So of course a bit of explanation is in order.

Philip “Pip” Whitcher left hit-making group The Sorrows to form a songwriting team with guitarist Roger Lomas. Whitcher’s involvement with The Sorrows predated Don Fardon, the singer who fronted the band for the hit “Take a Heart” (most easily found today on the essential 4CD Nuggets II: British Empire and Beyond). Lomas had been an early member of the group as well. But by the 70s they wished to strike out on their own, and while the fruits of their labors earned them next to nothing in fame nor fortune, the dozen songs now collected as Our Revolution will leave fans of stomping, good-time hook-laden 70s- style hard pop wondering why Rog & Pip weren’t as big as Slade or any of the era’s other glam-rocking hit makers.

Rog & Pip may have had a musical personality of their own, but there’s no mistaking the fact that everything about “Why Don’t You Do What I Want?” screams Sweet: the insistent beat, the shouted lead vocals and high backing voices, the fuzz-laden guitar, the direct and simple sentiments expressed in the song’s lyrics.

“My Revolution “ is even better, sounding to all the world like a cross between T. Rex and Uriah Heep (less the organs and histrionics). First-pumping and head-nodding are near-involuntary reactions to the rocker. “Rock With Me” adds some assured harmonica work, expanding the duo’s sound in interesting directions while staying well inside the format: “Come on and rock with me!” exhorts Pip while the tune chugs along, full-tilt. The phase-shifting riffage of “Evil Hearted Woman,” plus some guitar-and-bass lockstep work and nimble drumming may remind listeners of Deep Purple, or perhaps of an uncharacteristically upbeat Black Sabbath.

And speaking of Sabbath, on “Gold,” the band slows things down to the sludgy pace favored by Birmingham’s finest; the result is reminiscent of The Open Mind (“Magic Potion,” also on Nuggets II). For “Doin’ Alright Tonight,” it’s back to the stomping boogie, with some nice staccato riffage enlivened by – you knew it was coming – cowbell. When the band sings the tile lyric, you’ll find yourself singing along in a shout (mirroring the lead vocal) or perhaps in a helium-voiced pitch (along with the backing singers). The Free-style lead guitar breaks are icing on the cake.

Rog & Pip won’t have won any awards for subtlety or originality with tunes like “A Little Rock ‘n’ Roll,” but the hard-rocking tune – in the mold of a Mud or even Suzi Quatro – remains fun indeed. The snaky, vaguely sinister “Hot Rodder” ranks as Our Revolution‘s most subtly-rendered tune, but if subtlety is your taste, best keep moving past this in-your-face set of tunes. “It’s a Lonely World” slows things down and sounds like a cross between The Marmalade (once again, check Nuggets II) and Jimi Hendrix‘s “Hey Joe.”

“Why Do You Treat Me Like That?” is in many ways a retread of “Why Won’t You Do What I Want?” but then since Rog & Pip didn’t hit pay dirt with the original tune, one can’t blame them for rewriting it in hopes of success (however futile). “From a Window” is not a cover of the Lennon/McCartney obscurity, but is instead a heavy riffer that ranks among Our Revolution‘s strongest tracks. It also moves beyond the glam style toward something heavier, all while keeping the tune built around insistent licks, a (one would have thought) sure-fire recipe for success.

Alas, it was not to be. The heavy “War Lord” combines the Black Sabbath aesthetic with the bubblegum sensibilities of Sweet, and the result is another ace tune. But none of Rog & Pip’s efforts got them anywhere, and their association ended by 1977. The liner notes that accompany this 2014 release tell the story in exacting and engrossing detail; lots of photos (the performing lineups, the rare singles and picture sleeves) make an very good package even better. Though the band’s “revolution” was not, in the end, widely broadcast, the discerning retro-minded rocker should not be without Rog & Pip’s Our Revolution.