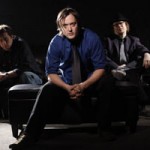 Memphis soul trio The City Champs brought their southern-fried (mostly) instrumental sounds to Asheville NC’s Orange Peel on Saturday February 19. Opening for the North Mississippi Allstars, the City Champs turned out a half-hour plus of their subtly updated take on the stylings of Booker T & the MGs. While the trio’s debut album The
Read More
As the old cliché goes, sometimes the apple doesn’t fall far from the tree. In 2007 Dhani Harrison debuted his new band (originally to be called beatson ), thenewno2. While the group took their name from the villain in Patrick McGoohan‘s groundbreaking late-sixties TV miniseries The Prisoner, there’s not much else backward-looking about thenewno2. The
Read More
After the semi-disaster of Night #2 (I had missed Night #1 altogether) of the 2009 Charlotte Pop Fest, I was left wondering how things would go. Event impresario James Deem had come out onstage part-way through the Friday set to announce to the crowd (well, not a crowd; more like a gathering) that due to
Read More
The Charlotte Pop Fest (September 24-26 2009) was both thrilling and disappointing, sometimes all at once. It’s important to make clear right up front that attendees easily got value for their investment, the lineup was impressive, and the organizers are a dedicated team. But, but. The three-day event organized by Charlotte musician James Deem, sought
Read More
One of the most memorable lines in John Landis‘ film The Blues Brothers takes place when the band arrives at a roadhouse. Elwood Blues (Dan Aykroyd) asks the proprietress, “What kind of music do you usually have here?” She comes right back with her reply: “Oh, we got both kinds. We got country and western.”
Read More
…and a little bit of the actual audio from the show as well.
Read More
I like progressive rock, especially the British/European varieties. Those seem informed more by European folk, music of the Middle Ages, and classical, yet with plenty of power and bombast leavened by subtlety. The American variants have never moved me as much. So while I really dig acts like Yes, King Crimson, Gabriel-era Genesis and lesser
Read More
As mentioned previously, I’m something of a Zappa fanatic. I was lucky enough to see the man onstage twice in the 80s; his peculiar hybrid of obscenely-complicated art/jazz/rock/whatever crossed with a withering sense of irony and a jaundiced eye toward poseurs of all stripes rendered his music tailor-made for a proto-postmodern twentysomething mulleted me. Or
Read More
Second to take the stage was Bigelf. Like Scale the Summit, these guys were unknown to me. I was totally unfamiliar with their music, so I did a quick bit of reading about them ahead of time. I learned that one of their trademarks is use of vintage instruments. So with that, I was delighted
Read More
First up was Scale the Summit. This four-piece (two guitars trading leads, plus bass and drums) trades in the modern instro-metal-prog genre. A really young lot (not Hanson “Mm-bop” young, not “Michael Jackson when he was human” young, but young nonetheless) turned out a bruising set. For me, the songs ran together and didn’t offer
Read More