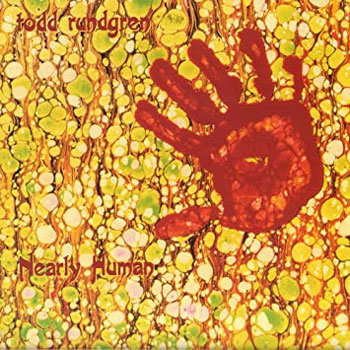 Even in the face of widespread venue closures, Todd Rundgren has found a way to bring live music to his fans. His run of shows had one of its final dates when he played for a Bay Area audience on March 19. But he and his band didn’t come to San Francisco; they were in Chicago for the “Clearly Human” virtual tour.

Todd Rundgren’s career is remarkable on many levels. He’s notable in his ongoing quest to harness the power of technology, doing so as part of a larger mission to find new and better ways to connect with his audience. An early example is his September 9, 1973 trip to San Francisco, his first visit here as a performer. “I didn’t do a whole lot of touring on the West Coast in those days,” he says.

That would soon change, and it all started with a most unusual live event at Golden Gate Park. “There’s a song on the [1974] Todd album called ‘Sons of 1984,’” Rundgren explains. His vision for the song was to have his audience participate in the recording. So when he played the tune live a few weeks earlier at Wollman Rink in New York City’s Central Park, he first taught the audience the lyrics to the chorus of the rousing, hopeful tune.

And Rundgren brought those tapes along with him to Golden Gate Park. “We set up onstage with speakers, and then we taught the song to the audience in San Francisco,” he recalls. “We played back the recording and had the San Francisco crowd sing along.” Listen to the finished recording and you’ll hear the New York audience in the right audio channel; the left speaker features the crowd from Golden Gate Park. “And then,” Rundgren points out, “at the end of the song they’re all singing together, so it’s sort of the entire country.”

Even in normal times, “Songs of 1984” is one of Rundgren’s lump-in-the-throat numbers, a tune that stands with “Hello It’s Me,” “Compassion,” “Can We Still Be Friends,” “Just One Victory” and select others as songs with deep emotional resonance. And in times of pandemic when audiences haven’t been able to enjoy the communal experience of a live concert in more than a year, a listen to “Sons of 1984” – with its massed chorus of unison singers – might just bring a tear to the listener’s eye.

In 1990, Rundgren embarked on another unusual project that involved San Francisco. Booking five nights at the Palace of Fine Arts, Rundgren and his band recorded the entirety of what would be his 13th solo album, 2nd Wind, live in front of the gathered audience. But it’s not a live album in the traditional sense; the audience was asked to keep quiet. While the finished recording captures the energy of a live performance, crowd nose is completely absent. It’s as highly polished a recording as the masterful producer-musician has ever done.

And 2nd Wind is something of a companion to the album that came before it, 1989’s Nearly Human. Thirty-plus years later, faced with the challenge of how to connect with his audience during a pandemic, Rundgren turned again to the soulful, uplifting, quasi-spiritual material of that ‘89 release. He recalls that in the late 1980s, music technology had taken a turn toward overdubbing. That meant “cleaner” recordings, but it often removed the in-person feel that comes from musicians and singers being together in the room, making music together.

Rundgren missed that human connection. “So I decided that I would do Nearly Human all live in the studio,” he says. “No matter how big or small the production was, it was everyone playing at the same time.” He believes that something mystical happens with that method of recording. “You’re performing it in the present, but you’re hearing [what it will sound like] in the future,” he says. As a result of Rundgren’s back-to-basics approach, Nearly Human ranks among his most “organic” sounding releases.

And so in 2020, Rundgren began plans to revive and celebrate Nearly Human by means of a virtual tour. Setting up his ten-piece band in a “black box” venue in Chicago, Rundgren organized a 25-date virtual tour for February and March, one that would narrowcast to a different city each night. With sounds and images transmitted live over a secure internet channel, Rundgren and his band performed most of Nearly Human along with several 2nd Wind tracks and select other favorites. The two-hour concerts made use of “geofencing” technology that can restrict viewership to audiences located in or near the targeted cities.

Though the geofencing aspect of the shows would eventually be relaxed, each of the concerts on the virtual tour was given as much local flavor as possible. “We try to preserve as much as possible in terms of the whole [concert] experience,” Rundgren says, “for both the band and the audience. Iconic local images are projected on the wall behind the band, including (when possible) a shot of the proscenium stage of the venue that the band would have been playing. The whole affair has all of the production values of a finished concert DVD; the difference is that it happens in real time.

Seated comfortably and safely at home, VIP ticket holders have their images displayed on large monitors placed in the front few rows of the Chicago venue, so the band onstage can view them and their reactions. A dozen or so actual concertgoers are allowed in, seated between the monitors. So there’s even a bit of actual applause between the songs in the 23-song set.

There are any number of technical challenges facing a venture like the “Clearly Human” tour. And in many ways, Rundgren may be acting as the proverbial canary in the coal mine. “Not only do I have to worry about what sort of demand there might be for a virtual tour,” he says with candor, “the entire industry has to worry about what sort of enthusiasm there will be in the audience to go out and be in a crowd again.” But as with much of Rundgren’s work, he asks himself one important question: “What can you do for the audience?”