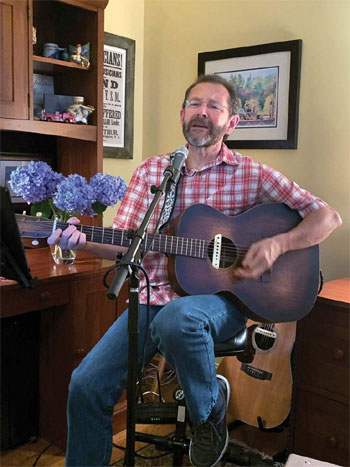 For the overwhelming majority of musicians, public performance is at the heart of what they do. But the worldwide pandemic has forced live concerts from the schedules of most all performers. Potential audiences are at home, and many of them have internet access via computers or smart phones. So increasingly, “virtual” concerts are taking the place of live performances.

Tom Fisch has released several albums under his own name, but since relocating to Flat Rock in 2004, his musical focus has been live performance. “Before the pandemic,” I averaged about 40 gigs a month,” he says. But as was the case for musicians across the country, that all stopped in mid-March 2020.

Fisch sings and plays acoustic guitar. “My performances are always interactive, with me bantering back and forth with my audiences,” he says. He talks from the stage to the crowd, but it feels more like a conversation. “I’ve always looked at my performances as a group of friends gathered around the living room sharing music,” he says.

When the pandemic hit, Fisch faced a realization. “It became clear to me that entertaining audiences in person was not coming back any time soon.” He knew about live streaming, but had always been too busy to try it himself. “It didn’t occur to me to try live streaming until I’d been out of work for a couple of weeks,” he says.

Crises can bring forth creativity. Fisch quickly put together a weekly live concert series he calls From My Home to Yours. Streaming via the video app on his smart phone, he approaches the performances the same way he did before: it’s about connecting with the audience. “We’re all just relaxing and sharing an evening of music and fellowship together,” he says.

Other musicians in the region have found live streaming to be worthwhile, too. And many – like Kelli Redmond of Americana band Letters to Abigail – share that relaxed, and even playful, attitude. “If we don’t feel like wearing pants, we can just film from the waist up,” she says. “And none would be the wiser!” But most admit that while live streaming is the way to go now, it’s not quite the same as being there. “For one thing, says acoustic musician Mare Carmondy, “There’s no one to laugh at my lame jokes!”

Even though that audience isn’t in the room, Tom Fisch makes a point of providing interactivity. “My wife monitors the concerts and feedback in another room,” he explains. In real-time, she transcribes names and notes from the comments. “She writes them large enough for me to read, and then she tapes them up near the phone,” Fisch says.

Many of his From My Home to Yours viewers are local, but Fisch says that people have “tuned in from as far away as Brazil and Australia.” He plans to continue the weekly shows as long as the pandemic endures, and possibly longer. “I think they will remain a part of what I do,” he says. “Live streaming is a nice addition to the options I have for sharing my music with my audience.”