Not counting Todd Rundgren’s “virtual concert” in Pittsburgh, the last time I wrote a review of a live performance was in December 2019, when I saw Rodrigo y Gabriela tear things up (semi-acoustically) in Asheville, North Carolina. The last time I witnessed a live music performance was a festival my wife and I happened upon in Old San Juan, Puerto Rico, in early March 2020, mere days before the world shut down. I’m sure that many of my readers can claim a similarly lengthy dry spell, live music-wise.

So I was quite pleased to have secured a pair of tickets to Peter Noone’s concert last night in Hendersonville, N.C., at the city’s Center for Art & Entertainment. As it happened, the intimate, socially-distanced show in a lively black box venue was the perfect way to ease back into the experience of, y’konow, leaving the house to go someplace where other people were also going. 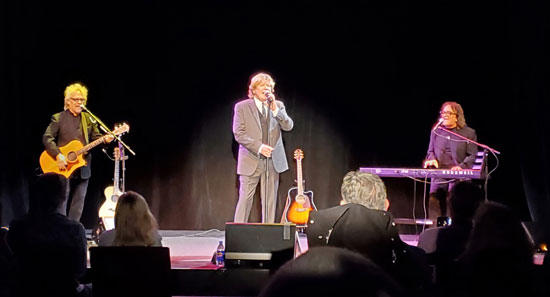 I had interviewed Noone several weeks earlier, for a feature I wrote for Bold Life Magazine. I found Noone to be funny, engaging, candid, full of stories and a cheerful willingness to share them. That experience of chatting with the former Herman’s Hermits teen idol turned out to be a reliable indicator of what it would be like to see him onstage.

Billed as “an acoustic performance,” the Hendersonville show was something of a one-off, not part of a tour but scheduled in between the end of one run and the start of another. For this pair of performances – a matinee and an evening show; we attended the latter), Noone was expertly supported by a pair of Cleveland musicians, each with his own impressive pedigree. Seated, keyboardist Rich Spina (a member of Noone’s full-band Herman’s Hermits since 2006) laid down what could be considered the musical bed, mostly providing piano sounds with the occasional string or organ patch and some deft left-hand bass work. 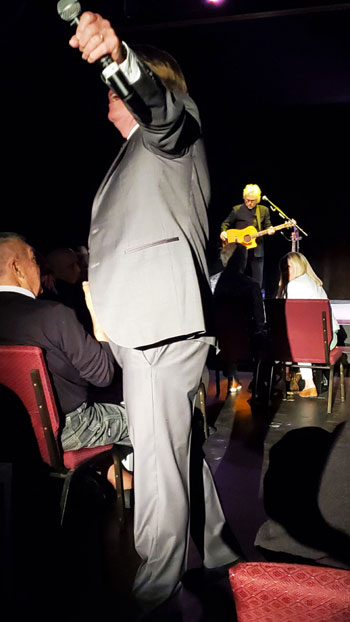 On amplified acoustic guitar was Billy Sullivan, an accomplished journeyman musician whom I first saw onstage two decades ago as a member of Gary Lewis’ touring band. Fun fact: Sullivan was also in Club Wow, the band fronted by former Blue Ash guitarist Frank Secich. Midwest rock royalty, that Sullivan; he has played with nearly every pop idol of the British Invasion era (He’s a modern-day Hermit as well). In between touring commitments, Sullivan and Spina are a duo playing locally back in Cleveland as well.

Last night, both men played (and sang harmony) in a manner that balanced musical expression with a clear understanding as to who the audience had come to see.

That, of course, was Peter “Herman Noone.” Today at age 73 – younger, of course, than most of his British Invasion comrades – he still cuts a lively figure. Nattily dressed in a three-piece suit (one that, as he noted, matches the one he wore on The Ed Sullivan Show). With a full head of hair and his trademark boyish charm wholly intact form the days of “Wonderful World” and “There’s a Kind of Hush,” Noone proved that he certainly knows how to work a crowd. Second song in, he was making his way through the audience (with wireless mic) and engaging with the audience members in a way that might have caught more than a few of them off guard in the era of COVID-19. (Moments before the show began, the woman seated six feet to my left introduced herself by saying, “I’ve been vaccinated!” So have I, I replied, and thank you.)

But amid the fun mix of Herman’s Hermits classics and occasionally odd covers (“Jingle Bells” in May?), unabashedly corny storytelling (including a mildly racy yet groanworthy joke built around a mention of Freddy Garrity of Freddie and the Dreamers), three things stood out brilliantly. One was just how many hits Herman’s Hermits scored back in the day.

Another was Noone’s voice. The man can sing. He had no trouble at all shifting from his normal/typical range on songs like the opener “I’m in to Something Good” to a clear falsetto. But he also – somewhat unexpectedly displayed that he can explore the lower range, too; his reading of Johnny Cash’s “Ringo f Fire” may not have made a helluva lot of sense among the evenings pop music menu, but his command of the song underscored the fact that he’s quite a vocalist. Even though I’ve long had plenty of respect for the man – a Tremblers fan am I – I didn’t see that coming. (Speaking of Noone’s early ‘80s power pop group, he demonstrated last night that he’s proficient on guitar as well.) 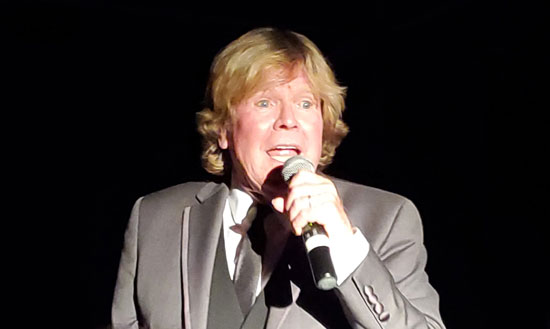 The third point is perhaps even more important and noteworthy. I’ve seen enough of these traveling nostalgia gigs to be able to spot when the artist is phoning it in. Most of the time, in fact, that’s the case. They’ve done the shtick a million times, and they might even be somewhat bitter that after headlining The ed Sullivan Show and being pelted by ladies’ undergarments, now they’re playing at (or near) a retirement village.

And that’s understandable. But even though Noone made more than a few “old” jokes – and good-naturedly did some kidding-on-the-square about how excited he was to be appearing live onstage in Hendersonville, North Carolina (population approx. 14,000) – he nonetheless made it clear that he lives for this stuff. His joy at entertaining the audience of about 100 persons seemed completely genuine. The show ran the standard 80 minutes, with no encore, but it’s inconceivable to me that anyone attending could have come away feleing they hadn’t received their money’s worth and more.

After a year-plus without concertgoing – something that had long been a major part of my day-in-day-out life – an evening with Peter Noone and his pair of accompanists was indeed the perfect way to dip my metaphorical toes back into the world of live music. Bravo.