Home  »  interview • live shows   »   Peter Noone: Still Into Something Good

Peter Noone: Still Into Something Good 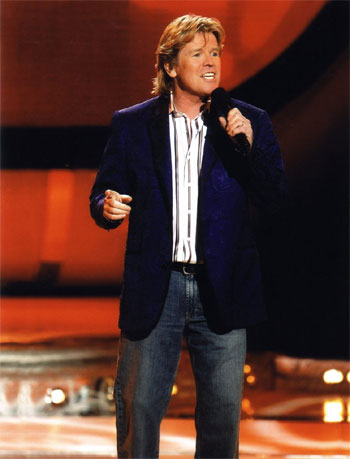 Darlings of a generation, Herman’s Hermits scored big on the pop music charts of the U.S., England and beyond in the mid 1960s. With hits like “I’m Into Something Good,” “No Milk Today,” “Mrs. Brown You’ve Got a Lovely Daughter,” “I’m Henry the Eighth, I Am” and many others, the group from Manchester, England rivaled the Beatles in popularity. Fronted by youthful singer Peter Noone, the band landed 18 of its songs on the American Top 40 charts, earned five gold records for albums released between 1965 and ‘67, and starred in three popular motion pictures.

Peter Noone left the group in 1971, but has continued a successful and high-profile career as a musician and actor ever since. In fact he got his start as an actor even before his recording career began. “I went to the Manchester School of Music, but I was not enjoying the music thing,” he says with a chuckle. “It was all a bit ‘Vivaldi and Germans.’” A new television network had recently launched in England; Granada Television sent a talent scout to the school. Noone recalls the scout’s brief: “We’re looking for an 11-year old kid who can play ‘The Holly and the Ivy’ on the piano.’”

Noone fit the bill – sort of. “I was 14,” he says,” but I looked 11.” So he landed the job, and it soon led to others. “Every time they were looking for a boy to play any kind of role, I’d get every job!” He even landed a three-episode role on Britain’s top-rated television soap opera Coronation Street. The beloved program has been on the air since 1960, and remains popular after airing more than 10,000 episodes. “It’s still number one,” Noone laughs, “even without me in it!”

But the actor-singer would go on to bigger things. When Herman’s Hermits released their debut single, “I’m Into Something Good” in August 1964, Noone was still a few months shy of his 17th birthday. But the song catapulted him and the band into the spotlight. And there they would remain for the next several years. With their catchy, singalong tunes and an undeniably cuddly front man as a focal point, Herman’s Hermits defined what would come to be known as bubblegum pop.

Noone’s talent had always been deeper and wider than Herman’s Hermits’ singles might suggest. After leaving the group, he went on to a solo career that leveraged his musical and acting skills. He released singles and albums on his own, appeared on television and toured internationally as Frederic in Gilbert and Sullivan’s comic opera The Pirates of Penzance.

Underscoring the fact that his musical tastes were hip, he led a power pop group, the Tremblers, in the early 1980s. And in the early ‘00s he collaborated with New York City multi-instrumentalist, songwriter and critics’ darling Richard X. Heyman on a well-regarded EP, Heyman, Hoosier & Herman. Today he hosts a popular segment on Sirius XM’s ‘60s on 6 station, Something Good.

That program’s title – a nod to his first hit single – is a reminder that Noone’s popularity has its roots in Herman’s Hermits. Since the ‘80s, he has often appeared fronting a group called Herman’s Hermits Starring Peter Noone. But in this COVID-19 era of limited seating shows and social distancing, Noone has embarked on a stripped-down, intimate tour that brings him closer than ever to his fans.

But Noone treats the shows the same way he would if they were concert halls filled to capacity. “It doesn’t matter how many people are in the audience,” he says, noting that these up-close-and-personal performances are very much like the ones he used to do at the Cavern in Liverpool, the famous haunt that helped launch the Beatles. “You would have a bunch of good songs and some good repartee that you could use with the audience,” he recalls. “You’d do some research about the place you’d be playing, and be a thing called an entertainer. And that’s what I always strive to do.”

So after more than a half century of performing, what keeps it fresh and interesting for Peter Noone? “I’m still trying to get it right,” he says, only partly in jest. “I try to sing the songs better every time.” He says that he works really hard to keep his voice in shape. He doesn’t recall who it was that gave him advice early in his career – “some really cool, old singer,” Noone says – but he keeps the message in mind. “You know, Peter,” the singer warned him, “If you can’t sing, you have to stop. And some people don’t.”