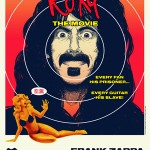 George Duke (1946-2013) was one of the most fascinating figures in music during the second half of the 20th century. Duke was a jazz-and-classically trained musician proficient on any number of instruments, though he is best known as a keyboard player. He got his start collaborating with French virtuoso violinist Jean-Luc Ponty, and his early
Read More
One of music’s greatest guitarists, Larry Coryell has enjoyed – and continues to enjoy – a long and storied career. After his professional start playing with Chico Hamilton, Coryell launched a solo career, enlisting the musical help of some of the most innovative, boundary-pushing musicians to aid in his own musical explorations. He’s played in
Read More

The back catalog of Frank Zappa is massive, and massively intimating. Never the most commercially-minded of artists, the virtuoso Zappa recorded and released more than fifty albums during his lifetime. (His estate has more than doubled his catalog, with all manner of posthumous releases; his so-called “100th album” is due out soon.) With albums that
Read More
Today I’m going to indulge in a brief change of pace. I’d like to tell you about a pair of reissues with which I am involved. I won’t be reviewing either title – what would be the point? – but suffice to say that if I didn’t think they are superb albums, I wouldn’t have
Read More
As much as I enjoy discovering new music – both live and on physical recorded media – my favorite part of this Musoscribe gig is engaging interviews. I’ve been at it of many years, but every year find new and fascinating conversations with musicians whose work I admire. 2014 was no exception: every one of
Read More
One doesn’t often think of melding progressive rock elements with jazz fusion; at least not if one wants to break even on an album release. But that’s the approach favored by bassist Antoine Fafard. Combining the best of (dare I say) smooth jazz with rock’s muscularity, Fafard is aided in his efforts by drummer Vinnie
Read More
Continued from Part Two… Bill Kopp: We’ve touched on this a bit already: there’s absolutely no guitar on the album. Was that a conscious decision on your part, to arrange the music without the use of guitar? As I mentioned earlier, I come from a rock background, so I’m still learning about jazz. And one
Read More