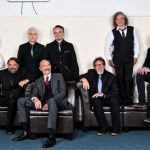 Here’s the second of three collections of reviews. The Hangabouts – Kits & Cats and Saxon Wives Good-timing, cleverly-written melodic pop is what’s on offer on the latest album from the Hangabouts. It rocks a bit harder than their last outing, and there are hints of some of the more adventurous end of early 70s
Read More

Today I’m serving up five more hundred-word reviews; today’s five all fit more or less into the progressive rock category, and they’re sourced from across this globe of ours. Mekaal Hasan Band – Andholan Talk about genre labels: I have some issues with the term “world music.” While often well-intentioned, it marginalizes most anything outside
Read More
With exceedingly few exceptions, progressive rock is a man’s game. There’s certainly no law against women singing or playing in the style – Julie Slick, for example, is one of the best bassists around these days, irrespective of genre and gender – but the truth is that the progressive rock scene is one in which
Read More
I’m on my honeymoon this week, so I thought it would be a good time to offer up some backlog-clearing entries in my occasional series of Hundred Word Reviews. And though the musical styles are all over the map, there’s a theme of sorts this time: each of the acts reviewed has been covered previously,
Read More
Continued from Part One… BK: This is an oversimplification, but bear with me. In rock, the drums pretty much keep the beat. In jazz, the beat is often implied. In progressive rock of the sort you do with Stick Men, your role seems to be somewhere in between, and the drums take on a role
Read More
Though his major-label introduction to the rock world was as drummer for Mr. Mister, Pat Mastelotto’s résumé would subsequently include a staggering list of credits in a dizzying array of different projects. His work with King Crimson – as part of the renowned “double trio” configuration (on and off since around 1995) is perhaps his
Read More
From their inception in 1969, King Crimson has always been about creating outside-the-box music that challenges (or simply ignores) convention. By the middle of the 1970s, the band had created at least two masterpieces: their debut album In the Court of the Crimson King and 1975’s Red. But after Red – when King Crimson was
Read More
From the album’s opening strains of “featured player” Harry Miller’s string bass, it’s clear that Islands is going to be quite a different affair from its predecessors. Released in 1971, King Crimson’s fourth long player found the incredible self-destructing band reinventing itself once again. The 1969 debut In the Court of the Crimson King was
Read More
Among King Crimson fans, 1970’s album Lizard is a misunderstood release, and ranks among the least-popular of the group’s albums. That’s a shame, as Lizard is effective and groundbreaking in its own ways. King Crimson leader Robert Fripp was convinced by no less a fan than Porcupine Tree’s Steven Wilson that Lizard is deserving of
Read More