The Drive to 1981 Begins: A Look Back at Robert Fripp’s Masterful ‘Exposure’ (Part 2) 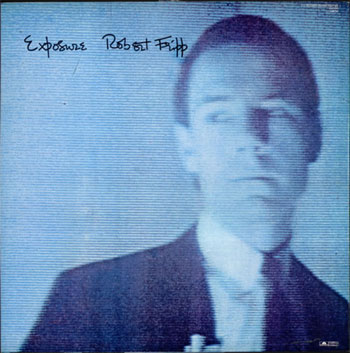 Back Cover of the ‘Exposure’ LP

Fans of King Crimson’s Red receive a wonderful treat with “Breathless.” Though the specific players on each track aren’t noted, the song – very much a cousin to Red‘s title track – features a very progressive Narada Michael Walden on the drum kit, and Tony Levin (of future Crimsons) on bass. Full of grace and crushingly heavy power, “Breathless” demonstrates that Fripp wasn’t quite done with the style he explored on recent King Crimson releases. (In 2018 and beyond, “Breathless” has found its way into the live set of the eight-headed beast incarnation of King Crimson VIII.)

“North Star” is a dreamy, subdued blues with deeply emotional Daryl Hall lead vocal; Hall’s Philly soul approach here may remind some listeners of Todd Rundgren. The song is atypical of Fripp’s work up to this point, but shows a style he’d sometimes pursue with the Adrian Belew-era King Crimson.

“NY3” is a demented instrumental, sort of a prog-metal precursor to the Brian Eno/David Byrne project My Life in the Bush of Ghosts, released in 1981. The decidedly NSFW lyrics-as-such are a found-sound argument between a father, mother and daughter. It’s a deeply unsettling slice of life with a nearly atonal, no-wave musical backdrop.

Side One of the Exposure LP concludes in more tuneful fashion, with the elegiac “Mary,” featuring a lovely vocal by Terre Roche. The song and arrangement wouldn’t be at all out of place on the Roches’ Robert Fripp-produced self-titled debut, released in 1979.

Remarkably for an artist so closely associated with the progressive genre, Fripp keeps all but one of the first side’s tracks under the four-minute mark; in fact, six of the eight cuts each last less than three minutes.

Flipping the vinyl LP over and dropping the needle yields the album’s title track. Fripp’s signature guitar is joined by spoken-word snippets (Gurdjieff scholar J.G. Bennett) and a decidedly funky beat that has more in common with Talking Heads than King Crimson. Throughout, someone spells out the letters of “exposure” in an emotionless voice. And just to make things weirder still, Terre Roche wails, moans and screams the word “exposure” in an almost free-jazz mode.

“Häaden Two” and “Urban Landscape” are more Crimson-style heaviness, with more (seemingly random) spoken-word bits flown in. The cuts sound a bit like the soundtrack to a very scary horror film, albeit with voices saying things like Fripp’s immortal line, “incredibly dismal, pathetic chord sequence.” Robert Fripp might not be widely renowned for his sense of humor, but clearly he has one. Bennett is heard to say, “You should know you have an unpleasant nature, and dislike people. This is no obstacle to work.”

Decidedly not a love song, “I May Not Have Enough of Me But I’ve Had Enough of You” showcases more hyperactive, free guitar work with vocals (not quite a duet) from Roche and Hammill. Those somehow seem to match the music, which is rooted in free jazz, art rock and punk. 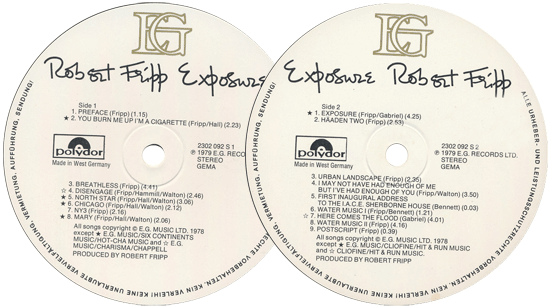 After seven seconds of audio titled “First Inaugural Address to the I.A.C.E. Sherborne House” comes a piece of pure Frippertronics, “Water Music I.” A beautiful and contemplative instrumental piece, it demonstrates the depth of emotional content within the Fripp/Eno innovation. And years before global warming/climate change would become recognized for the serious threat it poses to humankind, the spoken-word piece concerns that very thing.

All of which provides a simply perfect lead-in to the centerpiece of Exposure, the Peter Gabriel song “Here Comes the Flood.” Gabriel would record multiple versions of the song – including the best-known one on his 1977 solo debut Peter Gabriel (aka Car) – but none compares with the stunning simplicity of the recording on Exposure. Gabriel’s voice and acoustic piano are joined only by Frippetrtonics guitar; nothing else is needed. Gabriel’s heart-rending vocal wrings all of the emotion out of his lyrics, and as so often the case, the spaces between the notes are every bit as important as the notes themselves.

“Here Comes the Flood” segues right into more Frippetronics, “Water Music II.” As a kind of palliative soundtrack for the listener to meditate upon Gabriel’s tour-de-force, “Water Music II” runs beyond the four-minute mark. In such a context, its relative length makes sense.

A very brief track, “Postscript,” features some sloshing water, and a voice – Eno, perhaps, but whomever it is seems to be smirking – saying, “So … the whole story is completely untrue, a big hoax.” The final three words are looped, and then a phone is slammed down on its cradle, followed by the sound of someone walking away. Exposure thus ends.

Since its original release, Exposure has been reissued multiple times, with various bonus tracks. All are worthwhile, but it’s effectively impossible to improve upon the breathtaking power and eclecticism of the original. Robert Fripp would release more solo projects in the years to come, but none offered the musical smorgasbord of his 1979 debut.