I Talk to the Wind (and Other Instruments): The Ian McDonald Interview, Part Two

By 1976 McDonald was involved in the founding of a new and very different group. Joined by ex-Spooky Tooth guitarist Mick Jones and American singer Lou Gramm, McDonald launched Foreigner. The group would go onto become one of the biggest-selling acts of the rock era, and the music it made seemed a far cry from McDonald’s adventurous early progressive rock leanings. But McDonald doesn’t view it that way.

“Foreigner was based on songs,” he says. “It was no different to me than anything else I had done. I mean, King Crimson wasn’t born out of whole cloth; it was a combination of people’s experience, talent, and songwriting. So for me to become a founding member of Foreigner was no different.” Though he still played the occasional wind or brass instrument, in the English-American hard rock group, McDonald worked primarily as a guitarist. “People don’t realize that I was playing guitar way before King Crimson,” he says. “That was always my main songwriting instrument.” 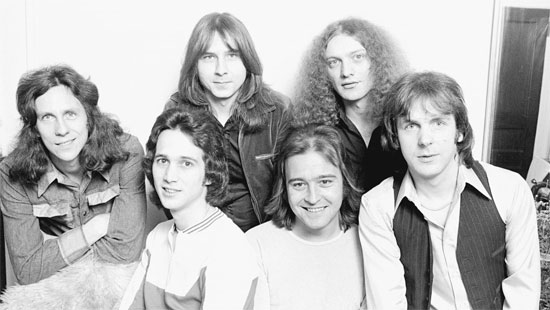 When it’s suggested that he was sort of the George Harrison of the group, with plenty of songs but a small allotment of his music on the actual albums, McDonald reluctantly agrees. “That’s one way of putting it,” he allows. “I don’t want it to sound like sour grapes, but I had a lot more involvement in the writing, curating, and production than I’m perhaps given credit for,” he says.

McDonald’s songs would often be overshadowed on Foreigner’s blockbuster 1977 debut, 1978’s Double Vision and Head Games from 1979. But the deep album cut “Tramontane,” an instrumental from the group’s second LP, stands as an exemplar of McDonald’s talents. It’s also an effective synthesis of both his pop and progressive inclinations.

Though he’s not credited, McDonald also wrote the signature opening motif of “Waiting for a Girl Like You,” one of five Top 40 singles from the group’s fourth album, 1981’s 4. And by the time of that album’s release, both he and founding keyboardist Al Greenwood had been dismissed from the group. “Mick and Lou wanted to downsize the band,” McDonald says, clearly not wishing to focus on the unhappy circumstances surrounding his exit from the highly successful group. “We went to the studio and there was no one there,” he recalls. “And that’s when we found out that we were out of the band.

“I get on well with the guys now,” he hastens to add. In fact, this summer McDonald took part in a short series of live reunion shows featuring all past and present members of Foreigner. The most celebrated date was in early August at the annual Sturgis Motorcycle Rally in South Dakota.

After Foreigner, McDonald enjoyed a lower profile, though he would remain busy. He collaborated on numerous projects with friends John Wetton (ex-King Crimson), Steve Hackett (formerly of Genesis) and former Stories lead singer Ian Lloyd. In 1999—more than three decades after the release of In the Court of the Crimson King—McDonald released his first (and to date, only) solo album, Drivers Eyes.

Though Drivers Eyes wouldn’t make much of a commercial ripple, it’s an excellent overview of Ian McDonald’s skills as songwriter, musician, lead vocalist, arranger and producer. Again his ability to find the common threads between progressive, pop and straight-ahead rock is on brilliant display. “It was quite an accomplishment,” admits the customarily self-effacing McDonald.

The multi-instrumentalist would return to the music of King Crimson yet again in 2002, when he joined four other band alumni to form the 21st Century Schizoid Band. With guitarist (and future King Crimson lead vocalist) Jakko Jakszyk fronting the group, 21CSB toured and released four live albums, featuring a repertoire that focused exclusively on the challenging, inventive early material from the celebrated group. “We had the luxury of having two horn players in the band—Mel Collins and me,” McDonald says. “So that was fun for a while.” Facing the high costs of touring and the eventual passing of drummer Ian Wallace, the band ceased operations in 2004. 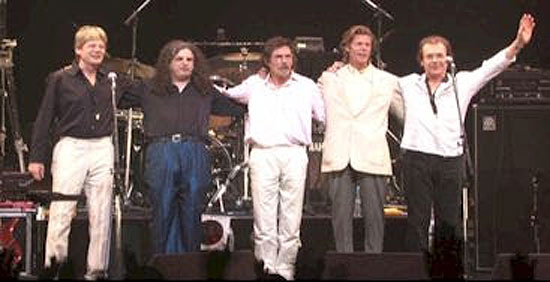 “Fast forward a few years,” McDonald says with a laugh, turning to discussion of his current activities. At home in New York City and walking his dog, he met his neighbors, Ted Zurkowski and wife Lynnea Benson. The couple ran a theatre company, and Zurkowski had what McDonald describes as “a three-piece, alt-country band” called Honey West. The couple eventually asked McDonald to write music to accompany some of their Shakespeare productions. He agreed.

“I had never worked in theatre before, let alone Shakespeare,” McDonald says. “So it was a great opportunity to learn and expand my talents, get experience in a new field, and learn a little bit about Shakespeare at the same time. I got some insight as to how plays and productions work.” McDonald worked on the project for a few years; during that time he also joined Honey West.

“Ted and I started writing songs together, and that evolved into the Honey West of today,” McDonald says. The group’s CD is Bad Old World; a vinyl re-release is scheduled for late 2018. Featuring drummer Holley and former Joe Jackson band bassist Graham Maby, the rocking alt-country sound of Bad Old World is, once again, no stylistic stretch for McDonald. In addition to producing the album and co-writing nine of the album’s dozen tunes, he sings and plays acoustic and electric guitars, alto and baritone saxophones, clarinet, electric sitar, flute, percussion, organ, electric and acoustic piano and several synthesizers. In support of the album, the group plays in and around New York City.

With such an extensive and varied body of work, picking a favorite track is no easy task for Ian McDonald. “I tend not to listen to things that I’ve done all that much,” he explains. But when pressed, he offers up a few. “I’m quite pleased with the flute coda on ‘I Talk to the Wind,’” he says. “’Love Has Taken Its Toll’ on the second Foreigner album is kind of a fun song that Lou and I wrote,” he adds. “I’m all over that track.” He pauses a moment and mentions one more. “’Epitaph’ on the first King Crimson album,” he says. “Greg Lake did an amazing vocal; I like how the whole structure and arrangement came out on that one.”

Though every one of his previous musical adventures eventually ran its course, today Ian McDonald is every bit as excited about Honey West as he was when he helped launch King Crimson, Foreigner and the 21st Century Schizoid Band. His signature and myriad musical talents have enhanced the quality of everything to which he has applied them, and the same is likely to hold true for his future endeavors.