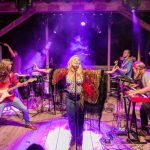 A shorter, edited version of this story appeared previously in Mountain Xpress. After an extended period of focusing on touring and business matters, Asheville-based soulful rock band The Broadcast has put a series of delays behind to release its third studio album, Lost My Sight. With restrictions related to the pandemic still in effect, live
Read More