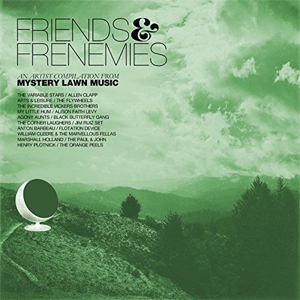 File next to: Sloan, Matthew Sweet

Based in the redwoods of Northern California, Allen Clapp‘s Mystery Lawn Music has in recent years become a trademark of pop music quality. Originally formed as a vehicle to self-release 20/20 – perhaps the best album by his group the Orange Peels – Clapp’s label has become a collective of like-minded yet stylistically varied artists. This 18-track disc is a sampler of the riches to be found in MLM’s growing catalog, and features a number of new and/or previously-unreleased tracks. Highlights include “Friend Collector” from Clapp’s newest solo release Six Seasons, as well as ace tunes from stablemates Agony Aunts, Alison Faith Levy, the Corner Laughers, Marshall Holland, Anton Barbeau, the Paul & John and many more. Previously-unheard acts (The Incredible Vickers Brothers, Black Butterfly Gang) offer solid tunes as well. Think of this as a sort of power-pop and tuneful-rock mixtape made for you by a really good friend.