The Corner Laughers Let the Music Do the Selling 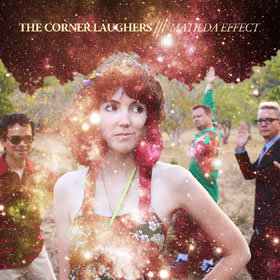 It’s a source of some mild amusement that when I Google “corner laughers,” the right-hand side of the resulting screen lists a number of the Bay Area group’s songs as dating from 1971. I’m pretty certain that at least two of the group’s number – bassist Khoi Huynh and his spouse, vocalist/ukulele player Karla Kane – weren’t even born in ’71.

But I can see where the mistake might have been made. There’s no doubt that the tuneful, upbeat, ba-ba-ba flavored music of the Corner Laughers has at least some of its roots the AM radio pop styles of the early 1970s. There’s certainly more to the group and their music than that: there’s a wickedly clever postmodern sensibility to their often-abstruse (but never obtuse) lyrics, and there’s nothing dated about the band’s crystal-clear production aesthetic. Their earlier two albums – most notably the discs recorded for and released on Mystery Lawn Music – set out and defined a sonic and lyrical style that was both distinctive and possessed of enough wiggle room to allow the group the freedom to move in many musical directions.

There’s a timeless sunshine pop sensibility to the group’s music. In the great tradition of groups like The Turtles, The Corner Laughers are never afraid to use “la la la la” as a lyric. And their music is very effective at conveying an upbeat feel, even when the lyrics are a bit dark, or a bit bent.

In my review of The Corner Laughers’ Poppy Seeds (2012), I characterized the group’s music as “earwigs,” that is, music that stays in the listener’s head long after the last note has faded away. And that quality is consistent on their upcoming release as well: the ten songs on Matilda Effect (out officially in mid-June 2015) continue in the tradition of catchy musical confections.

And the group’s approach has ukulele as a central component. The uke isn’t rock or pop’s most common instrument – not by a long shot – but it is enjoying a resurgence, thanks to the tuneful uses to which it is being applied. The Corner Laughers weren’t hitching onto some bandwagon by adding a ukulele player, though. “I just happened upon it,” Karla Kane says. “Khoi just had one laying around.” she picked it up and “started noodling a bit, and then learned a few chords.” Though until that time she didn’t play any instrument, Kane notes that she had already begun writing songs. “That was a long time ago,” she hastens to add. “I’ve been playing for awhile now.”

Karla goes on to note that the instrument’s small size and lightweight qualities make it great for using live onstage. Hers is amplified so it can be heard alongside the guitar work of KC Bowman and the rhythm section of Huynh and drummer Charlie Crabtree.

The group’s live dates sound a bit different than the record, because the studio recordings make full use of multi-tracking techniques to layer Kane’s multiple vocal parts. Onstage, Kane says that “Khoi and KC do a lot of the backing vocals. But,” she laughs good-naturedly, “they don’t always have quite the same range as I do.” 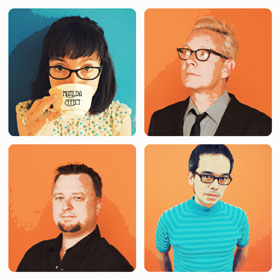 Not only are The Corner Laughers superb musicians, but they’re all serious fans of music. Not long ago they got the chance to work with Martin Newell. Kane believes that Newell should be “the most famous musician in the world.” And while the music that Newell makes – both under his own name and as Cleaners From Venus – has a more DIY aesthetic to it than the highly-polished Corner Laughers releases (thank producer Allen Clapp for that), Newell’s music shares a deep understanding of the value of melody and carefully-thought-out lyrics.

So what did the band learn by working with the Grand Old Man of DIY? “Playing a show with him was my ideal show,” Kane gushes. Her thought right after the gig: “What do I do now? I don’t know! That was my dream.” Karla has a special appreciation for Newell’s words. “He’s the best lyricist I know. He puts such care into making the lyrics count. He literally is a poet.” She goes on to praise the quintessentially British tone of Newell’s lyrics; those same values figure into The Corner Laughers’ music. Kane says that the tune she describes as an “insomniac’s lullaby” (“Lammas Land”) was inspired by – and written immediately after – the group’s performance with Newell.

Some of the group’s songs are lyrically impressionistic; others are about more defined subjects. “The song ‘Octavia A’ was written to be the theme song for my daughter,” Kane says (Like Kane and Huynh, drummer Charlie Crabtree and his wife became parents recently). “But you don’t have to know that, or know her,” Kane says, to enjoy the song.

There’s another band on the Mystery Lawn Music label, a group called Agony Aunts. And that group sounds similar (but not identical to) The Corner Laughers. “Khoi and I had been big KC Bowman fans,” Kane recalls. “But we didn’t know him at all; we didn’t even know that he lived close by. But through Facebook, we became friends with him. And Agony Aunts, when it started, was us and KC. That was before he joined The Corner Laughers.” Today the core lineup of both bands (the three mentioned plus drummer Crabtree) is identical, but the lyrical approaches differ. “Agony Aunts songs tend to be written by KC,” Kane says. And Agony Aunts songs are, “I don’t know…maybe a little more psychedelic,” suggests Kane. “A little more mysterious. They’re the Dukes of Stratosphear to our XTC,” she laughs.

Some of The Corner Laughers’ label mates – most notably The Orange Peels and The Paul & John – have launched crowd funding initiatives to finance some of their releases. But not so The Corner Laughers. The answer why may be as simple as this: they’re a bit on the bashful side. “None of us feels comfortable doing it,” Kane admits. “It’s a lot of work, and a lot of…salesmanship. We’re all a bit shy; I guess we’d rather let the music speak for itself. ”

Happily, Matilda Effect does just that. The album will be available on CD, MP3, FLAC and – a first for The Corner Laughers – good ol’ vinyl, on June 12.