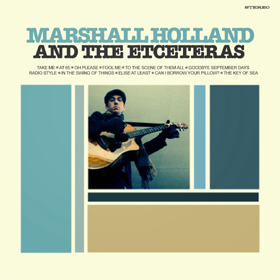 The name of this act – Marshall Holland and the Etceteras is a rock-pop red herring: every sound you’ll hear on this delightful record was produced by Holland himself. The tunes are often gentle excursions with crystalline production, pop melodies that fold in subtle elements such as accordion and acoustic guitar. Holland often overdubs his enchanting voice to fill out the sound, and his songwriting has the flavor of Jackie DeShannon.

This self-titled album (originally self-released but since picked up by jangle-pop brain trust Mystery Lawn Music) is an intimate affair: though it’s carefully put together, it has a warm and friendly ambience that makes the listener feel they’re in the room (or studio) with Holland. “Oh Please” has a decidedly Merseybeat flavor. Imagine an Emitt Rhodes with infinitely fewer personal issues (and less of a Paul McCartney fixation) and you might end up with Marshall Holland. Holland prefers the texture of pizzicato strings, tinkling glockenspiel and ethereal harps (“Fool Me”) over crunchy power chords; his straightforward songwriting style and vocals recall Elliott Smith. The brief instrumental “To the Scene of Them All” suggests that Holland could move into soundtrack work (paging Wes Anderson) should he want to.