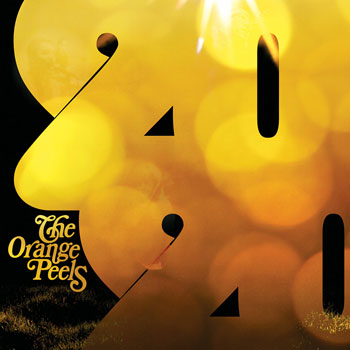 That was the message handwritten on a post-it from The Orange Peels‘ Allen Clapp. Owing to a slight mix-up in messaging, I ended up receiving a copy of the group’s new album 2020 directly from the band. In any event, Clapp’s sentiment couldn’t be more apt; in fact that two-word phrase is a near-perfect summation of the audio experience that is The Orange Peels’ 2020. As close to a perfect example of 21st century pop (in the best sense of that word), 2020 is a varied, charming effort that brings together some of the finest pop traditions.

And in doing so, 2020 sounds little like the work of an indie band from California. The five-piece is based in the aptly-named Sunnyvale — the perfect name of a town that hosts creators of such upbeat, fun and catchy music. (In fact, Sunnyvale is situated near the south end of San Francisco Bay.)

Possessing a good amount of that precious indie cred, The Orange Peels have released a few albums of their particular brand of pop (2020 is their fourth). But…don’t tell the kids it’s pop. Let them go right on thinking it’s indie rock. Because it is, really. The music of The Orange Peels’ 2020 draws unabashedly from some of the highest quality influences. Yet they pick and choose their touchstones, so one can’t easily peg The Orange Peels as slavish followers of a particular style or trend. Yes, you’ll hear Mellotron string parts, electric sitars, hand claps, those kinds of things. But you’ll also be treated to an early 80s alterna-vibe and guitars that in turn soar and crunch.

Charting a rockier path than labelmates Papas Fritas, The Orange Peels do in fact rock, but they sweeten the mix with impossibly catchy hooks — you older folks, think of the Raspberries as a group with a similar approach (but not a similar sound).

The disc opens with “We’re Gonna Make It.” The tune starts out something like the La’s transcendent “There She Goes” but quickly shifts gears into a Cars-like, stuttering, staccato arrangement and lead guitar figure. String synth and harmonies imbue the song with a sunny ambience. “Seaside Holiday” is bouncy and melodic like the best early 80s Britpop.

In “Shining Like Stars,” a loud and charmingly skewed guitar riff forms a central musical motif. Though built on a musical foundation reminiscent of Blondie‘s “One Way or Another,” the song — destined for hit status in a just world — is as wholly original as pop gets.

Despite an opening figure that may conjure memories of England Dan & John Ford Coley‘s 1976 MOR hit “I’d Really Love to See You Tonight” the song “Birds of a Feather” primarily features that 1967 pop sound so loved by the makers of iPhone commercials. In fact, the gorgeous “Birds of a Feather” would fit perfectly on the Zombies‘ Odessey and Oracle (sic), a pop classic from, well, 1968.

But don’t start thinking that The Orange Peels are stuck on some sixties trip. On the lovely “Jane Lane” the band delivers a lush pop vibe familiar to fans of Prefab Sprout‘s 1985 classic “When Love Breaks Down.” Yet “Jane Lane” serves up an even stronger melody and a welcome harder edge than McAloon’s group.

The groups mixes it up as well. The midtempo dream-pop of “Emily Has Told Me Why” features a guitar riff straight out of Queen by way of Jellyfish. “Charmed Life” — featuring vocals by drummer/multi-instrumentalist Bob Vickers — has hints of skiffle and pub rock; in fact the tune wouldn’t be out of place on Nick Lowe‘s Jesus of Cool, a late 70s Kinks album or a late 80s Jazz Butcher album.

And that’s merely six of 2020‘s ten tunes. The remaining four are every bit as delightful. Throughout the album, The Orange Peels navigate the narrow path between sugary pop and hooky riff-rock. Despite its being released at the tail-end of December 2009, the album made this reviewer’s list of top albums of that year.

It’s clear to see that 2020 is the best of both pop and rock worlds. As Allen Clapp says, happy listening.