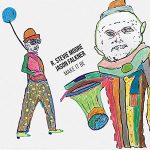 File next to: Martin Newell, The Orange Peels, Fountains of Wayne With output that makes Guided by Voices’ Robert Pollard look like Boston’s Tom Scholz, lo-fi hero R. Stevie Moore knows how to write indelibly catchy songs. But he often doesn’t: on his 400-plus albums, Moore’s decidedly skewed pop often wraps accessible melodies inside ultra-quirky,
Read More
Here’s another installment in my occasional series of capsule reviews; this time ’round I’m focusing on vinyl releases. My self-imposed limit for this particular exercise is 100 words on each album. Hoff Ensemble – Quiet Winter Night It’s subtitled “An acoustic jazz project,” so don’t look for any Fender Rhodes or vibraphone. In fact, to
Read More
Known primarily — when he’s known at all – as a studio rat, R. Stevie Moore has more than 400 albums to his credit. No, that’s not a typo: this underground sensation has recorded and released literally hundreds of albums – first on cassette, and then later on CDR — since 1966. Stevie takes issue
Read More
R Stevie Moore is one odd dude. I can’t say whether he’s the sort that listeners would wish to “have a beer with”, but his music is worthwhile for the adventurous. There’s a whole sub-subgenre of music that sometimes goes by the sobriquet of “incredibly strange music.” (I’m not sure of this, but I think
Read More