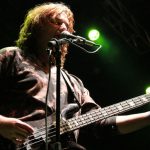 Once again, it’s time for some hundred-word reviews. This first set spotlights five archival releases loosely falling into the prog subgenre. Greg Lake & Geoff Downes – Ride the Tiger We head pretty far into the prog-rock weeds for this one. Greg Lake (guitar, bass) of ELP got together with Geoff Downes (Buggles, Yes, Asia)
Read More
I am unashamed to admit it: I like progressive rock. I like it a lot. And yet I can’t trot out the boilerplate statement, “The fourteen-year-old boy in me loves his prog,” because at fourteen – even at seventeen – I didn’t really like the stuff. Which is a bit odd, seeing as those years
Read More
I truly mean no disrespect to the man, but experience has taught me not to get too excited about any musical project that involves Billy Sherwood. He’s clearly a talented musician: skilled and appealing on many instruments including guitar, keyboards and drums, he’s also a fine singer, and skilled at production, engineering, songwriting and so
Read More