I am unashamed to admit it: I like progressive rock. I like it a lot. And yet I can’t trot out the boilerplate statement, “The fourteen-year-old boy in me loves his prog,” because at fourteen – even at seventeen – I didn’t really like the stuff. Which is a bit odd, seeing as those years were when prog was in its prime era (well, the decline of its prime era, anyway). But my tastes for King Crimson, Yes, Gentle Giant and their ilk developed soon thereafter, and even today I rarely go more than a day or two without spinning some prog on the turntable or CD player. Or Spotify or Pandora, where I often learn about the newer stuff.

And, to be honest, because I’m one of a dwindling number of prog-friendly reviewers still fogging a mirror, I do get the stuff sent to me from time to time. Here, then, are quick looks at two nominally progressive releases, new for 2013. This time I’m stretching to 250 words per album. 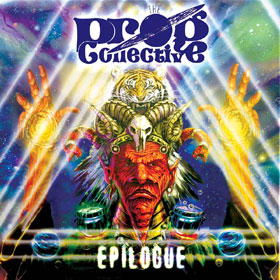 Prog Collective – Epilogue
Have you ever wondered, dear reader, what might happen if you took Big Generator-era Yes, put XTC‘s Colin Moulding on lead vocals, and added a saxophone player? Yeah, neither had I. But we have the answer on this album. “Are We to Believe?” indeed sounds like 80s Yes, and perhaps that’s because – despite the putative name of this outfit – this nine-track album is really another Billy Sherwood solo album. Once again, Sherwood writes a bunch of tunes, lays down the instruments and vocals, and then gets out his Rolodex. This time, the emphasis is a bit more on vocalists, but there are plenty of celebrity solos layered atop Sherwood’s tracks. And the man deserves credit: he’s got some heavy (if aging) friends: a mere two tracks in, you’ll have heard Rick Wakeman, Steve Hillage, Mel Collins, John Wetton, Derek Sherinian and John Wesley. And you’ll hear none of ’em again on Epilogue: the guest list simply goes on. Whether this is a good idea remains to be determined. Sometimes it works, but elsewhere it seems that Sherwood is tailoring sound-alike tunes (“Adding Fuel to the Fire” features Fee Waybill and sounds like a Completion Backward Principle outtake). If these cats were actually in studios together (and most assuredly they are not), they’d be tripping all over one another. Instead, it’s a (literally) phoned-in jumble appealing enough to be worth a listen, yet it’s never especially memorable. Also, it must be said: the cover art is positively dreadful. 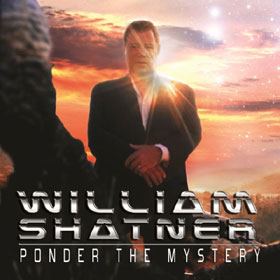 William Shatner – Ponder the Mystery
The title alone invites obvious jokes: One mystery is, why? Clearly, The Shat is no singer. His “Rocket Man” is a camp classic, and while his ersatz (he’s no Ken Nordine) word jazz hit the mark with his Ben Folds collaboration “In Love,” 1998 was a very long time ago. As his long-time co-star might have summed up, this project is “highly illogical.” Still, what we have here is – wait for it – another Billy Sherwood project. He wrote the music (and, natch, played all the basic tracks) while Shatner actually wrote the lyrics. And they’re fun, in a new-agey, inscrutable, Desiderata kind of way. This time the Rolodex spinning yields guest spots featuring everyone from Zoot Horn Rollo (Captain Beefheart’s Magic Band) to The Doors‘ Robby Krieger to – believe it or not! – Al DiMeola. Yes: Al-fucking-DiMeola plays on a William Shatner album. One almost begins to wonder if Sherwood has blackmail files on all these time-honored musicians. But Shatner remains the undisputed star of this particular project. As he over-emotes “Give it back!” on “Where It’s Gone…I Don’t Know,” it’s quite impossible to tell if he’s serious, or (as the British so memorably say) taking the piss. Either way, his readings are set against sympathetic, melodic prog backing, with Sherwood singing along in a sort of Greek chorus way. The packaging deserves mention, depicting Shatner wandering through what looks like the Hieronymus Bosch-inspired cover of C.A. Quintet‘s A Trip Thru Hell.

More progtastic reviews coming soon, including some absolutely cracking stuff from RPWL and Marbin, among other names you might not recognize.