southern culture on the skids Archive 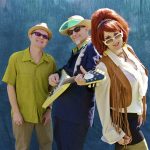 For more than 30 years, Chapel Hill, N.C.-based band Southern Culture on the Skids has been making fun, often silly music that represents the band’s irreverent yet loving perspective on […]
Read More
I had the pleasure of attending more live music shows this year than I could count. A lot. Really. These were my favorites. Click on the titles for a full […]
Read More
It’s one thing to make good music. A challenging thing, not to be taken for granted, but as far as live performance goes, ultimately it’s only one part of the […]
Read More