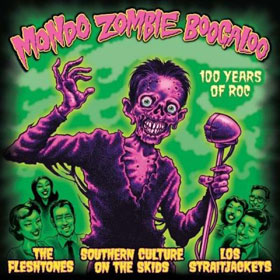 It’s one thing to make good music. A challenging thing, not to be taken for granted, but as far as live performance goes, ultimately it’s only one part of the mix. Another thing is to put on a good show. Some artists do that without getting the first part of the equation (Gene Simmons, I’m lookin’ at you). Precious few can muster both, and do it reliably, consistently.

So what, dear reader, might be the odds that an evening’s entertainment might include three such acts? In my experience – and I’ve been to a lot of shows in my time – it’s a pretty damn unlikely proposition. But the exception that proves the rule is the current – as in, right this moment as I write these words – tour billed as “Mondo Zombie Boogaloo.” Featuring three bands who have long been performing at the top of their respective games, the tour makes its final three stops tonight (Halloween) in Carrboro NC, tomorrow (11/1) in Asheville NC, and then wraps up at Atlanta’s Masquerade (in the “Hell” room, natch) on November 2. I spoke with key members of all three bands – The Fleshtones, Los Straitjackets, and Southern Culture on the Skids – about the tour, and the new Mondo Zombie Boogaloo: 100 Years of Roc album that features all three acts.

Two of the bands (Los Straitjackets and The Fleshtones) are signed to Yep Roc for their album releases, and SCOTS (who are on Kudzu) have allowed their tunes to be included on the North Carolina label’s Boogaloo disc. And while each of the bands has their own unique approach to music, they share much in common; they’re friends, and musically kindred spirits. All three are “strongly rooted in the past,” asserts Peter Zaremba (keys and vocals, The Fleshtones). “But not for the past’s sake. And without reverence for that past. It’s not like we dig up this stuff and treat it like museum pieces. We treat it as a living organism that’s still developing and changing. Mutating, even!”

“And we all enjoy being onstage,” Zaremba adds. “A lot more than the average band. There may be things in our lives that are sources of anguish, like anybody else. But playing rock’n’roll is not one of those sources of anguish for us.” He feels that inflicting anguish upon an audience is not part of the Fleshtones’ brief, either. If, like his band, “you have to have a good time to be spiritually and emotionally liberated, then so be it.” Enthusiastically concurring with the argument that live rock’n’roll does not (and should not) have to be a zero sum game, Zaremba says that at a Fleshtones show, “everybody wins.”

“I think we all bring a sense of fun to rock’n’roll,” says Eddie Angel (guitar, Los Straitjackets). He agrees with Zaremba about the bands’ “love and respect for traditional rock’n’roll,” and compares it to the approach found in many bluegrass and blues bands. “They know where the music came from. In this day and age, that’s sometimes lost in rock’n’roll.” Rick Miller of SCOTS sums it up: “We all like to have fun, and music is our vehicle.” He adds one more thing all three bands have in common: “We’re all old as dust!”

That collective experience is the foundation of the new albums’ “100 Years of Roc” subtitle; SCOTS celebrate their thirtieth year together this year. Add the other two bands’ tenure to that and you come up with the 100-year figure. All three bands played together at 2012’s Yep Roc 15 celebration in Chapel Hill, and that show’s success gave rise to the idea for them to tour together. The bands have all shared bills before, two at a time, but this tour marks the first time all three groups have taken to the road en masse. And since Los Straitjackets had already recorded five Halloween-themed tunes (including a rocking reinvention of the “Theme From Halloween” soundtrack tune), SCOTS and The Fleshtones decided to add songs of their own that fit the theme, and then build the brief tour around showcasing those numbers. 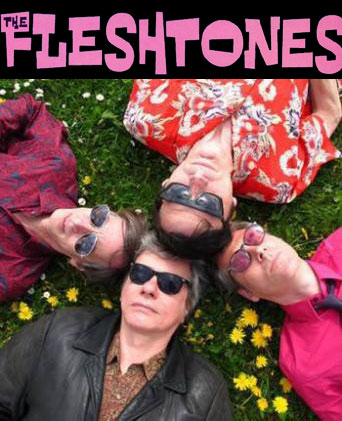 At the time of our conversations, the tour hadn’t yet started – it kicked off on October 17 in Illinois, and SCOTS joined the tour five days later – so the performance order hadn’t yet been sorted out. But that didn’t seem to matter much to Peter Zaremba. “We’re all bands that enjoy watching each other play. I’d actually go see these guys,” he says. “And they would do the same.” Asked if audiences can expect an all-star end-of-show number featuring all bands at once, all three men interviewed are circumspect. But Zaremba allows that “there are definitely opportunities for us to play together.” Mondo Zombie Boogaloo includes a few tunes on which SCOTS’ Mary Huff joins The Fleshtones. “So,” chuckles Zaremba, “if she’s done taking care of her makeup and whatnot, we’d certainly like her to come out and sing one or two of those songs with us.”

Peter handles the lead vocal on the new record’s “Que Monstruos Son,” a Spanish-language reinvention of Bobby “Boris” Pickett’s “Monster Mash,” a tune that does in fact feature all three bands. So what may happen onstage remains to be seen and heard. “I’d be more than honored to come onstage and sing that,” Zaremba says. “Anything can happen. Mostly, I think we’re gonna wing it.” He pithily characterizes the upcoming show as “the closest to nonstop excitement that you’re gonna see live onstage, anywhere. We’ll take care of everything; all you have to do is show up.”

Believe it. The Fleshtones, Los Straitjackets, and Southern Culture on the Skids will be at Asheville’s Grey Eagle on Friday, November 1. Show time is 9pm. Don’t miss it.