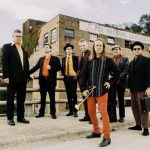 This is the second of three short features on Asheville-based artists releasing new albums in March 2020. As the 21st century enters its third decade, the Firecracker Jazz Band is doubling down on a music style that enjoyed its heyday a century ago. But guitarist and banjo player Jason Krekel believes he knows why 1920s-style
Read More