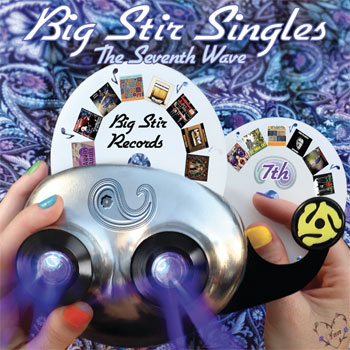 Time was, Jordan Oakes reigned as the tastemaker supreme in the powerpop world. His Yellow Pills compilation series shone a light on the very best that the genre had to offer. And the four volumes in the series – all quite expensive today if you can even find them (you can’t have mine) – hammered home the point that for all its perceived narrow focus, powerpop is a fairly big-tent style. There’s room for all kinds of artists and styles; one needn’t be a Big Star, Beatles, Badfinger or Raspberries acolyte to participate and contribute.

Oakes got out of the compilation-making biz some years ago. Since then, others – Bruce Brodeen and Kool Kat Musik’s Ray Giancetti foremost among them – have continued to champion the style, each in his own way. And most recently, Rex Broome and Christine Bulbenko’s Big Stir label has brought forth a cornucopia of riches.

Many of the releases on their label take the form of albums by superb artists, issued on CD (and occasionally vinyl). I’ve reviewed quite a few of those. But the label’s steady stream of digital singles (singles used here in its classic, vinyl-era definition of not one but two songs) emphasize just how rich and full is the current state of powerpop. 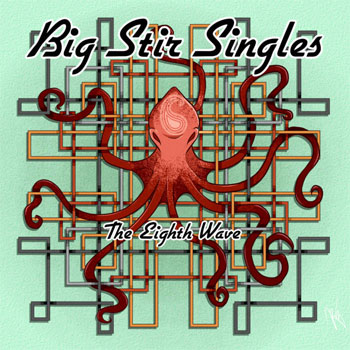 Those singles have been collected in physical media, as well, thank goodness. And the most recent entries are Big Stir Singles: The Seventh Wave and an eighth volume in the rapid-fire sequence of releases. The format is straightforward: Anywhere from 20-25 tracks or so, with the a-sides first and then the b-sides. So at least ten artists are featured, and the sets serve not only to document the singles series but to provide a sort of “here’s what we’’re up to at the moment” kind of update, one that serves as well as any newsletter might.

The names will – or should – be familiar to readers of this blog as well as aficionados of the style(s) of music contained on the CDs. The Seventh Wave collects singles released by Big Stir between May 1 and June 26, 2000, and features music by acts including Anton Barbeau, The Corner Laughers, Rick Hromadka, Nick Frater, Agony Aunts and many others.

The Eighth Wave is every bit as good, collecting the 10 singles (20 songs) Big Stir released between July 3 and August 22 of Pandemic Year One. Artists featured include Spygenius, The Brothers Steve, Librarians with Hickeys, Vegas With Randolph and several more.

Nearly all of the material on both sets is original songs, with an occasional cover (Jason Berk’s cover of the Traveling Wilburys’ “End of the Line,” Librarians with Hickeys’ “I Enjoy Being a Boy,” originally recorded by the Banana Splits). Occasionally a tune will be a demo recording, but nearly everything here is professionally produced, delivered with verve and enthusiasm. Whether you’re interested in testing the waters before picking up an artist’s album or just want the CD equivalent of a really good radio station, Big Star Singles: The Seventh [or Eighth] Wave is/are a solid choice.