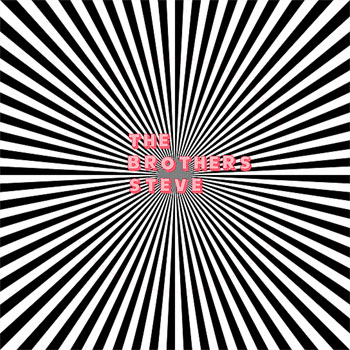 Following a proud rock ‘n’ roll tradition of misleading band names, The Brothers Steve aren’t brothers, and none is named Steve. The L.A.-based band plays its own brand of powerpop, with a healthy dose of bubblegum added into the mix. The band has previous released three singles (including a Christmas-themed one) but their debut album (#1) features seven new songs alongside three tunes that appeared on those (digital-only) singles.

In keeping with The Brothers Steve’s cartoon aesthetic – check their website for examples – the music on #1 has strong echoes of The Vandalias, a cartoon-themed powerpop band immortalized on one of Jordan Oakes’ essential Yellow Pills sets. But the chirpy vocals are supported by music with a harder edge, reminiscent of Redd Kross at their clever-pop punkiest.

Harmonies and ba-ba vocals slay me, and #1 serves up both in great measure. The muscular riffage of “Angeline” is balanced by the group’s strong vocal work. “She” isn’t the Monkees classic, but it’s a solid jangle-pop tune nonetheless, featuring some winning chord changes and subtlety amid the rocking-out-ness.

The band changes things up stylewise while operating inside their chosen genre. “Carolanne” is sweet, chiming pop in a manner that recalls Matthew Sweet. The title and refrain of one of the album’s strongest cuts exclaims, “We Got the Hits,” and while that may or may not be accurate in a commercial context, in terms of quality, The Brothers Steve deliver on that promise. And the psychedelically-tinged “C’mon Pappy” channels the ambitious melodic rock of 1960s L.A. legends Love.

Continuing on that ‘60s theme, Side Two opener “Songwriter” suggests what it might sound like if The Stooges and The Monkees had hooked up. (Put another way, it’s again redolent of Redd Kross.) Previously released – albeit with a different mix – as Big Stir Records digital single #81, the catchy “Carry Me” is certainly single-worthy.

Hand claps often find a place in god-timing pop rock, and they’re very much at home on “Good Deal of Love.” The song may not break any new ground stylistically, but it’s memorable, well-crafted music. Meanwhile, “Beat Generation Poet Turned Assassin” makes plain the irreverent, pop-culture-focused sense of humor that pervades The Brothers Steve’s music. The song itself is characterized by some high-energy playing, distorted power chords, insistent bass, even more hand claps and an infectious chorus that will have you singing along. It may well be the strongest cut on the record.

The Brothers Steve head in a very different direction for #1’s album closer, “Sunlight.” The Unplugged-style song is characterized by a gentle lead vocal, plenty of acoustic guitar, a lovely bit of electric piano and close vocal harmonies. It’s a bit out of place on this collection of uptempo rockers, but it makes the important point that The Brothers Steve have talent and versatility to burn.

From Big Stir Records, the vinyl release of #1 features an eye-popping op-art sleeve and an even more impressive blue-splatter vinyl pressing.