You know those cool Pete Frame rock family trees? One of those could come in handy when dealing with The Ramones. The group started with Johnny, Dee Dee, Joey and Tommy. When Tommy (i.e. the one in possession of what’s most conventionally known as talent) left, Marky took his place. Tommy came back at one
Read More
Historical revisionism is a tricky business. And it’s a daunting endeavor: the writer faces an uphill battle, attempting to convince his or her audience that what they’ve come to accept as the truth is in fact inaccurate. But thank goodness for those who take virtual sword in hand to do battle with prevailing wisdom. As
Read More
John Borack’s John Lennon: Life is What Happens is subtitled “Music, Memories & Memorabilia,” and that’s a tidy summing-up of what this book is all about. Part social commentary, part reminiscence, part criticism, part price guide, part coffee-table book, Life is What Happens occupies a useful spot as it touches on all of those areas.
Read More
More than a hundred years ago Prussian statesman Otto Von Bismarck said “Laws are like sausages: it is better not to see them being made.” In a general sense this wry observation is probably true, but thank goodness that modern society has political junkies – many of them reporters, as it turns out — who
Read More
The Beatles vs. the Rolling Stones: Sound Opinions on the Great Rock’n’Roll Rivalry by Jim DeRogatis and Greg Kot Voyageur Press; 190pp. US$35.00 My teenage years started in the mid 70s, some seven years after the Beatles announced their breakup. But some remnants of the sixties mindset remained even then: you were implicitly expected to
Read More 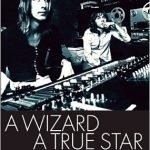 Here’s the thing: I occasionally review books, but I certainly never sit down to write a review before I’ve actually finished reading that book. It only makes sense. Rules are made to be broken. And Paul Myers’ A Wizard, A True Star: Todd Rundgren in the Studio is so friggin’ awesome that I simply couldn’t
Read More
If you’ve ever followed — or tried to follow the career of Neil Young, you know that his muse has led him down a circuitous path, one whose outline is, it would seem, clear only to him. Ever since Young came on the national scene with the Buffalo Springfield, he’s developed a reputation as a
Read More
Vinyl Lives, the new book from James P. Goss, is one long mash note to the idea of the community record store. By means of a series of twenty-five profiles, Goss makes clear his love of this type of retail establishment. While popular perception is that record stores are a thing of the past, Goss
Read More
Viewed through one particular prism, Record Store Days is one long mash note to the bygone era of brick-and-mortar retail record shops. The book by a pair of serious musos — Gary Calamar and Phil Gallo — is chock full of heartfelt reminiscences of those bygone days. But Record Store Days is much more than
Read More
Covering the life and career of Todd Rundgren is a serious, sprawling undertaking (trust me!). The prolific multi-instrumentalist has recorded and released several dozens albums, first as a member of proto-powerpop sixties group Nazz, then as both a solo artist and member of Utopia. He’s been at the forefront of technology (sometimes too far out
Read More