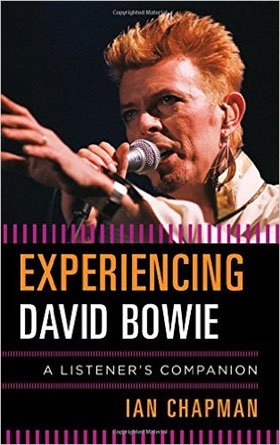 A few years back, Book publishers Rowman & Littlefield initiated an intriguing series. Each book in that series – each with its own author – would explore a particular slice of music, be it a genre (say, jazz) or artist (Led Zeppelin, for example). The author would endeavor to provide the reader with a new way of looking at the musical style or body of work. The idea was to create a written work that could serve as a kind of critical listener’s guide, giving tips on what to listen for to experience a greater appreciation for the subject.

Every author was free (to some extent) to bend the discussion into his or her own writing style. And as a result, some books in the series work better than others. Experiencing Led Zeppelin: A Listener’s Companion by Gregg Akkerman is very successful in that regard; the author works his way through the Zep catalog chronologically. Reading that title, I found myself going back to the original albums (on vinyl, in my case) and discovering new things. And on a fundamental level, leading readers back to the music itself is the book’s mission.

The latest title in the series is Ian Chapman‘s Experiencing David Bowie: A Listener’s Companion. As with all titles in the series, this book is most valuable if you’ve already heard the music being discussed. But I suppose it would work reasonably well for a reader new to the work of David Bowie.

Chapman contextualizes Bowie’s work in his (the author’s) own very subjective perspective. He writes of growing up in New Zealand, being less than enchanted in the wooly hippie music tastes of his older siblings (The Beatles and Cream, for example), and the rumblings of interest he found in nascent glam rock (Sweet, Mud and the like).

Chapman makes the keen observation that most people of his (loosely-defined) generation first discovered Bowie’s music around the time of The Rise and Fall of Ziggy Stardust and the Spiders From Mars. Once hooked, they went backward into his catalog (Ziggy Stardust being Bowie’s fifth album) and then followed along in real time as Bowie’s career continued.

As such, that’s the convoluted chronology that Chapman uses to work his way through Bowie’s catalog. And it certainly made sense to me: that chronology is exactly how I came to David Bowie’s music.

Chapman is no fanboy, and is unafraid to call a dud a dud. As such, it’s little surprise that he finds David Bowie, the artist’s debut album, both unimpressive and largely lacking any indication of the deep well of creativity to come. His measured appreciation for the albums that would follow picks out the qualities that Bowie himself seemed to be discovering, settling upon, and them building upon.

Chapman’s narrative approach is to describe the discovery of each new album in a kind of second-person voice: you go to the record store. You wait in line (yes, we used to do that). You take the record home. You look at the front and back covers. You put the record on the turntable. You flip it over after the side finishes. And so on. Describing it her makes it sound a bit silly, but in Chapman’s hands it works quite well, especially – I should think – with readers who actually did experience new records exactly that way.

For whatever reason, though, Chapman quietly abandons that approach about two-thirds the way through Experiencing David Bowie. Maybe it was the dawn of the CD era; maybe it was growing up. Who knows? But the sudden disappearance of that narrative style is a bit jarring for the reader. And even more so when it reappears, albeit briefly, near the book’s end.

Chapman makes the case for many of Bowie’s more recent albums (the book runs right up through 2013’s The Next Day, at press time Bowie’s latest album), but his descriptions of the man’s work over the last couple of decades is perfunctory at best. Like most Bowie fans, it’s clear that Chapman’s sympathies lie with the 1970s canon.

The author’s perspective reinforced some of my own feelings toward Bowie’s music: though I collected every one before it, I quit buying his records right after Let’s Dance. That album was a monstrous success (commercially, anyway) but somehow rang hollow, lacking the gravitas of Bowie’s earlier albums. And when Tonight and Never Let Me Down came out (1984 and 1987 respectively), I didn’t even bother.

For whatever reason, Chapman pointedly avoids discussion of Bowie’s live albums (David Live, Stage, and a couple of others) and gives the Tin Machine studio albums only the briefest of mentions. I would have enjoyed his perspective on those discs. But the critical analysis he brings to bear upon such late-period Bowie albums as Heathen and Reality has gotten me interested enough that I just might check out those titles. And realizing that makes me say to Ian Chapman, “Job well done.”