Back to School with Les McCann (Part 1)

Invitation to Openness is not only the title of one of jazz great Les McCann‘s most celebrated albums (newly reissued; more on that later); it’s also the title of his new book of photography and essays. Throughout his storied career as a touring and recording jazz musician, McCann came face to face – in personal, intimate settings – with legends in music, film and public life. An accomplished amateur (though he’d effectively “go pro,” as we’ll see), McCann shot countless photos in crisp black-and-white, capturing his subjects in a knowing manner that (for example) publicity photos often fail to convey. 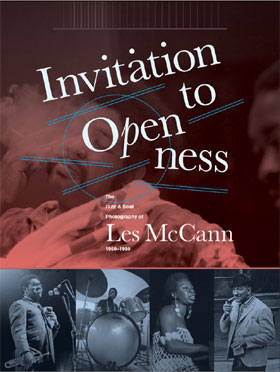 And one of the book’s most striking qualities is its variety. McCann’s lens captures onstage photos, backstage photos. He includes posed shots, candids. His subjects are famous musicians and unidentified people. Comics like Richard Pryor and Redd Foxx are featured, as are photos taken at pro basketball games. Yet somehow, with all this diverse imagery, there’s a unifying aesthetic within the pages of Invitation to Openness. “Every artist, every creative project has a sequence,” McCann says. That gives the finished work flow and rhythm, he says. A project like his book, then, is “based on something you haven’t seen before. So you’re looking at [the raw material], assessing it: now what do I do with it? And maybe you can’t do it, so you get somebody whose eye you can trust.” And in this case, McCann had a pair of collaborators that he describes as his “corps of angels”: his longtime manager and confidante Alan Abrahams, and Pat Thomas, author of the book Listen Whitey: The Sounds of Black Power. “I took all of the pictures,” McCann says, “but then I put it in their hands.”

There was some healthy back-and-forth involved in the book’s creation. “I gave them all my pictures,” McCann recalls. “And they came up with about 700, I think. And then we narrowed it down to about 300 or so: ‘What do you think of these?’ ‘Yeah, I like that.’ ‘No, I don’t want that.’” McCann notes that initially, the project was to focus only on his photos of jazz musicians. “But my photographs are not just one thing, like my music is not just one thing. So they got the message.” 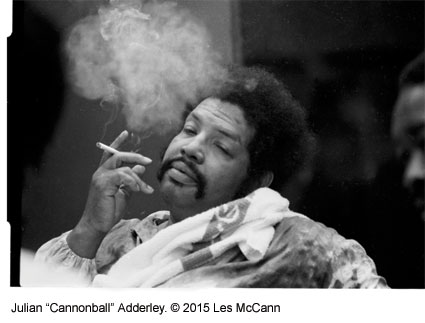 Some of the photos in Invitation to Openness are left to speak for themselves; others include McCann’s annotation. McCann writes that the book’s early 1970s photos of jazz great Julian “Cannonball” Adderley are some of his favorites. “There’s a little story that goes with that in the book,” he says. “It was the first time somebody picked one of my photographs, saying, ‘We’d like to use this.’ And they paid me for it.” But the Japanese magazine made an amusing error. “They put my name in there as ‘Les McCann Keyboard!’ I liked that, y’know? I’ve been all over the world, and people have called me everything.” Reflecting on fellow soul-jazz giant Adderley, McCann says, “I have nothing but fond memories of his joyful life, his joyful music, and his zest to be great. And [seeing him] was the first time that I went to a club and was totally blown away with everything I heard the band play.”

Asked if there’s a subject he missed the opportunity to photograph, McCann answers quickly: “God.” Pausing a beat, he wryly adds, “The day I met Jesus, he was in a hurry to get someplace.” After the laughter subsides, he continues. “I can’t think of anyone, no. ‘Cause I met everybody. I’m not talking about me being onstage and all that; I was put in a position to just be everywhere. Everything I ever wanted to do, I ended up doing ten times as much…stuff I didn’t even plan on. I came into this life with the beautiful understanding that I was ‘in school.’ I’m here to learn what this Earthly adventure is about. I might mumble and stumble, but the goal is to love myself. And then by loving myself, I’ll know how I want to love and treat everyone else. Because I truly love people, and everything that’s on this Earth.” He adds, “I’m not confused about it; not anymore.” 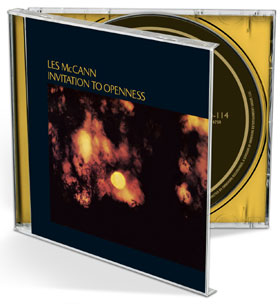 McCann’s 1971 album Invitation to Openness is a landmark release, as evidenced by the fact that it’s been kept in print and/or reissued so many times since its original release. The latest CD reissue, on Omnivore Recordings, is produced by Pat Thomas, and features a bonus track, a live reading of McCann’s signature tune, “Compared to What.” When I suggest that it’s one of his best releases, McCann is quick to correct me. “You can never say that; I don’t think you say that about any music. Because for me, it’s kind of personal. When I came to do [Invitation to Openness], I went into New York City and within one day I had told the producer what I wanted to do. And then organizing the people who’d be on the record – over fifteen people – and having them all in New York at once, it was a magic moment. The whole project was. So my special feelings and memories about it are about the session and the people.” He also notes that the album “was extremely well recorded. They captured the essence and ambience of what people were doing.”

McCann recalls his reaction at the Invitation to Openness session: “Oh my God: it really worked!” He says, “What you have to do is experiment. I’m creating 24 hours a day, and that’s the message I try to share with people. We came from creation; therefore, we are creation. It drives me crazy when people say [about themselves], ‘Oh, I wish I had a talent; I can’t do nuthin’.’ I say, ‘Shut the hell up. Get quiet, and look deeper into yourself. Not outside; look inside, and you’ll find everything you’re looking for.’”

“A song may live awhile, but as far as style, you can’t keep doing the same thing. That’s another reason I’m so happy about the idea I had for Invitation to Openness. I gave very few – if any – instructions. No rules; just play. Swiss Movement broke the door open for me: don’t lock everything into a set pattern. And that was very enlightening for me.