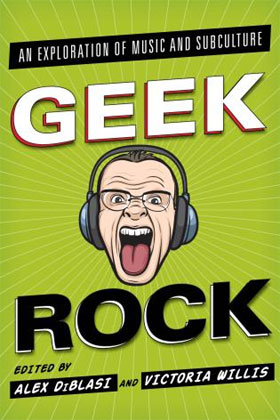 Rock’n’roll and scholarship make strange bedfellows. At first blush, the idea of approaching the work of rock bands from a scholarly point of view is patently absurd; such juxtapositions give rise to the aphorism (of indeterminate origin) “Writing about music is like dancing about architecture.” But it can be done – and successfully – if the writer has his or her feet metaphorically balanced in the two camps of popular music and academia.

That’s the chosen formula for the intriguing new title, Geek Rock: An Exploration of Music and Subculture, edited by Alex DiBlasi and Victoria Willis. Across a wide swath of scholarly essays, the book endeavors to characterize, examine and dissect what the editors term “geek rock,” a subgenre of rock music that places an emphasis on, well, being self-consciously intelligent.

As such, there are no Geek Rock essays expounding upon the literary antecedents of Ramones lyrics. The artists explored within Geek Rock are, one might observe, many of the usual suspects: Frank Zappa, DEVO, They Might Be Giants. But the collected essays also dig deep into obscure corners of rock/pop subculture, exploring the, um, geekiness of artists whose names will be unfamiliar to even the most inveterate rock fans (Darko Rundek, anyone? Bueller?).

The bulk of the artists covered in the eleven scholarly essays fall into that nebulous “indie” category; neither fish nor fowl, neither rock giant nor obscuro. Discussions of the work of The Mountain Goats, mc chris, Man…or Astroman?, The Magnetic Fields, and even Crash Test Dummies (remember them?) make up the bulk of Geek Rock.

Apparently there’s a rather rigid format to which scholarly essays must adhere (hey, I went to business school, so my experience with such is mercifully limited). I do recall from my high school years the experience of the “five paragraph essay”; an admittedly useful template for creating a brief examination of any given topic. My English teachers drilled the template into my consciousness, and to this day I can crank out a five-paragraph essay on nearly anything. (Once in college, tasked with coming up with one on the spot, I crafted a five-graf essay explaining how to open a door. I got an A-plus).

And though that essay/thesis template may be a useful guide for the crafting of scholarly essays, to casual readers it can come off as more than a little stilted. Such essays fill the pages of Geek Rock, resulting in a sometimes mind-numbing sameness to very disparate subject matter. It’s often a case of, “Now I shall tell you about blank. Here I am telling you about blank. Allow me to summarize my observations about blank.” You get the idea.

But if one can get past that, the essays are illuminating and thought-provoking even at their worst (and/or densest), and provocatively insightful at their best. Happily, most of Geek Rock‘s essays lean toward the latter. Of particular note is DiBlasi’s “Frank Zappa: Godfather of Geek Rock.” DiBlasi is not only a keen observer of Zappa’s massive catalog, he’s an insightful one who understands (as opposed to merely shrugging about) Zappa’s so-called Project-object, the philosophy that all of his output – records, live performances, interviews – are truly components of one single, large, unified work. To those who remain on the fence about Zappa’s importance, DiBlasi’s essay is recommended in the strongest terms.

And Ian Steinberg‘s thoughtful comparison/contrasting dissection of the work of DEVO and that of the early 20th century Italian Futurist art movement makes for irresistibly fascinating reading, even if one doesn’t fully buy into the author’s analysis. (It helps, I should think, if one has viewed Futurist art; certainly no great art scholar myself, I happened upon a Futurist exhibit less than a year ago at New York City’s Guggenheim Museum. Absent that background, I would have had to refer to Google or Wikipedia to navigate my way through Steinberg’s essay with any sort of understanding.)

Sometimes, though, the topics wade far too deeply into the woods for the casual reader and/or non-scholar. Willis’ exploration of the Lacanian subtext of They Might Be Giants’ music is the sort of thing that won’t appeal to most readers, TMBG fans though they may be. The titles sometimes tell the story. If “’A Very Subtle Joke’: T.S. Eliot, J.D. Salinger, and the Puer Aeternus in God Shuffled His Feet” doesn’t scare you off by its title alone, then you’re a braver reader than I. (I did read it, but…wow.) Some of the essays bear the fingerprints of a too-earnest college student, shoehorning deep and arcane knowledge of their pet band into a scholarly box. The fit and finish aren’t always factory-smooth.

But what they always are is geeky, which, at the end of the day, in a delightfully meta sort of way, is the point.