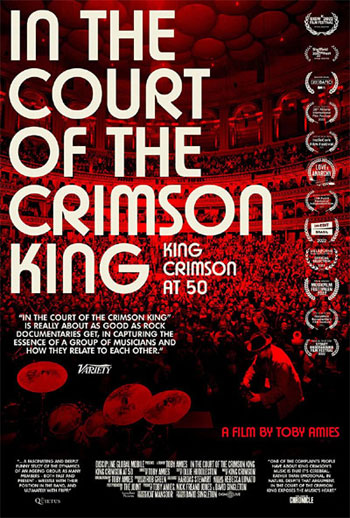 IN THE COURT OF THE CRIMSON KING

UPDATE: The first and second screens are SOLD OUT, but due to high demand, Grail Moviehouse has added a THIRD screening (with discussion), at 4pm. Link below gets you tix to that screening.

One of rock music’s most original and uncompromising groups is also one of its longest-lasting: founded in 1969 by guitarist Robert Fripp, King Crimson has changed the landscape of modern music more than a few times during its on-and-off existence. Fripp is the band’s sole mainstay; more than 20 musicians have passed through its ranks.

The ever-changing King Crimson ushered in the progressive rock era at the end of the ‘60s, pioneered progressive metal in the 1970s, combined “worldbeat” textures with Western music in ‘80s and explored industrial and post-rock styles in the 1990s and beyond. On the occasion of the group’s 50th anniversary, filmmaker Toby Amies set out to make a documentary exploring the history of the band.

The resulting motion picture is as odd, idiosyncratic, challenging and ultimately entertaining as King Crimson itself. As the press kit for In the Court of the Crimson King: King Crimson at 50 asserts:

What began as a straightforward documentary about the cult rock band
King Crimson as it turned 50, mutated into an exploration of time, death,
family, and the transcendent power of music to change lives. But with jokes.

Hosted by Asheville-based author and music journalist Bill Kopp, Grail Moviehouse presents a special screening of the film on Monday, December 12 @ 7pm and sponsored by AshevilleFM. After a brief introduction, we’ll watch the film together. And then afterward, we’ll engage in a moderated discussion about King Crimson.

The event is the first in a planned series of Music Movie Mondays at Grail Moviehouse. We’ll watch and discuss new releases, classics and cult favorites.

WHAT: Music Movie Mondays Series: In the Court of the Crimson King: King Crimson at 50
Special screening and moderated discussion hosted by Bill Kopp
WHERE: Grail Moviehouse, 17 Foundy Street, Asheville
WHEN: Monday, December 12 @ 4 and 7 p.m. / Tickets are $15