Book Review: How to Talk to Rockstars 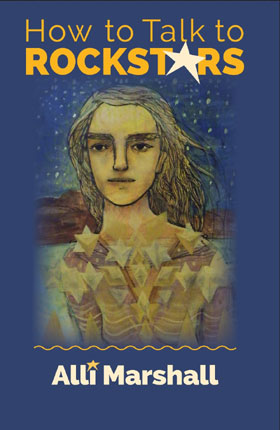 Like most writers, I read a lot. But I rarely read fiction; I think the last work of fiction I read prior to last week was Stieg Larsson‘s Girl with the Dragon Tattoo series. But when I learned that Alli Marshall – Arts Editor at Asheville’s altweekly Mountain Xpress – had published a new novel with a music journalist as its central character, I was intrigued, and happy to make an exception.

I quickly discovered that How to Talk to Rockstars is not a work of autobiographical fiction; the book’s Bryn Thompson bears only the most superficial resemblance to Marshall. But the author has clearly drawn upon her considerable experience as a music writer/journalist in the development of this story.

There’s not a great deal of what one could term traditional dialogue in the pages of How to Talk to Rockstars. Much of the book is given over to a sort of inner monologue, in which Bryn agonizes over an upcoming major interview. And while there are certainly fundamental differences between the book’s central character and myself, I found myself identifying with many of Bryn’s innermost thoughts.

The story arc – which Marshall unfolds in nonlinear fashion – concerns Bryn’s upcoming interview with a sort of singer/songwriter/rockstar, one with whom’s work Bryn is deeply enamored. The tension rises from the question: How far should I go in connecting with him? But mercifully, How to Talk to Rockstars is not some romance potboiler. It’s about deeper issues than that. The character lists a number of so-called “rules” to which a music journalist should best adhere. These rules are sometimes mere realizations of facts on the ground: you will not become great pals with the rockstar. Don’t try to impress him/her with your knowledge. Ask a penetrating question, then shut up and let them answer. And Bryn/Alli notes a rule that it took me some time to learn: when the interviewee finishes answering the question, let some silence hang in the air. Give them a moment, and as often as not, they’ll pick right up again, giving a deeper, more heartfelt, more thoughtful, more revealing answer than before.

How to Talk to Rockstars subtly points out the added perils of being a female in the male-dominated worlds of music and music journalism. Suffice to say that women interviewers must contend with a whole range of issues when conducting an interview – especially if it’s an in-person one – that are simply not part of the male journalist’s experience. From an ethical point of view, that’s neither right nor wrong; it’s simply how things are. And Bryn’s character never complains about the situation; she merely struggles to find the best ways to deal with it.

All of the characters are the products of Marshall’s imagination, save one. (A vignette involving meeting and chatting with Brian Eno seems likely drawn from actual experience.) And while ever-so-occasionally Bryn seems to be reaching a bit to impress the reader with the eclectic nature of her musical interests (a series of long name-checking lists that include hipster favorites), those lists serve to place her in a context with which readers in their 20s and 30s can best identify.

How to Talk to Rockstars breezes by quickly, and it’s a very enjoyable read. For those who have ever wondered what it’s like to interview notable musicians (and you do wonder, don’t you? Please?), How to Talk to Rockstars provides an illuminating window into the sometimes frustrating, occasionally boring, sporadically exciting and always unpredictable work of the music journalist. More importantly, the book also shines light on the human inner dialogue – full of self-doubt, recrimination, trepidation and just-plain-fear – with which anyone breathing can identify.

The national release of How to Talk to Rockstars is June 1, but author Marshall will host a local launch on Friday, May 15 at Asheville’s venerated independent bookstore, Malaprop’s Bookstore/Cafe. That free event begins at 7pm, and will feature “treats, live music, a reading and Q&A session.”