Bill’s first book, Reinventing Pink Floyd, was published by Rowman & Littlefield in February 2018. His second book, Disturbing the Peace: 415 Records and the Dawn of New Wave, was published in 2021 by HoZac Books.

Depending on one’s interest, one is either amazed and entertained or bored to tears with Bill Kopp’s encyclopedic knowledge of the popular music of the last fifty years. A rock/pop music historian, he has amassed a collection of way more than 6,000+ albums, nearly half of those on vinyl.

“Even when I was a kid, I knew I wanted to be a Rock Journalist™. People who have seen the film adaptation of Nick Hornby’s High Fidelity say that John Cusack’s character reminds them of me. I don’t know if that’s meant as a compliment or not.” 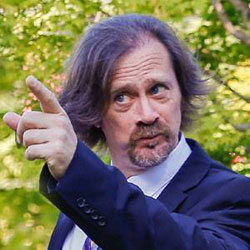 He has also authored press kits and/or news releases for World Party, Gin Blossoms, Holly Golightly, Cary Grace, Billy Jonas and others, and write several artist biographical entries for the Amoeba Records website. . He’s a frequent guest on AshevilleFM and assorted podcasts. After an acclaimed series of lectures, in 2022 he launched Music to Your Ears, a monthly live-and-in-person discussion series focusing on classic albums.

He lives in a nearly century-old house in Asheville, NC with his wife, an impossibly cute little dog, that mountain of vinyl, and way, way, way too many synthesizers and guitars.

Note: You can find him on his personal Facebook page as well, but while there’s plenty of musical content to be found there, there’s also plenty of personal and political content (with accompanying strong opinions with which you’ll either agree or disagree) that may well be of less interest.