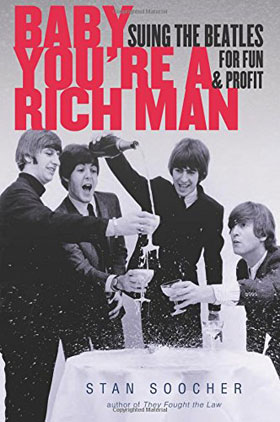 One can and should be forgiven for greeting the news of yet another book about The Beatles with more than a hint of skepticism. I mean, the Beatles phenomenon has been exhaustively dissected from most every vantage point: artistic, sociological, cultural, and so on. Not to deny for a second the value and importance of them and their music, but pretty much everything that needs to be written about them – save for the next two installments in Mark Lewisohn‘s obsessively detailed yet eminently readable trilogy – has already been published. Right?

I was certain the answer was yes. But then I learned of a new book by Stan Soocher, Baby You’re a Rich Man: Suing the Beatles for Fun and Profit. Setting aside the amusing (but perhaps needlessly snarky) second part of that title, Soocher’s goal is a fascinating, largely heretofore-unexplored topic: the myriad of lawsuits directly and/or indirectly involving The Beatles.

There’s nothing dry or unnecessarily knotty in Soocher’s prose. With the skill of a forensic accountant — but the storytelling finesse of a novelist – the author details many of the major legal entanglements that plagued the Beatles at various points in their career. And – understandably drawing upon the historical scholarship of those who have written before – Soocher places the lawsuits into a context that lay people (that is, non-lawyers, non-accountants) will understand and appreciate.

Some of these topics have been covered before, most notably in Apple to the Core: The Unmaking of The Beatles, the 1972 book by Peter McCabe and Robert Schonfeld. And the topics were discussed in Peter Brown‘s 1983 book (with Steven Gaines), The Love You Make. But the former could draw only upon information then in the public domain, and much of what Soocher covers was officially secret at the time, or not easily learned. And the latter suffers – at least to some degree – at the hands of its author’s desire to paint himself – a significant participant in that book’s stories – in a favorable light.

Soocher isn’t exactly a disinterested observer; no, such a point of view simply wouldn’t provide the initiative required for an author to piece together all of the information. But Soocher is a largely impartial witness, a writer who sets out the facts and context while exercising commendable restraint and no more editorializing than is necessary.

The legal messes that involved The Beatles – or at least the ones discussed in Baby You’re a Rich Man – fall surprisingly neatly into four categories: Messes brought on or exacerbated by manager Brian Epstein; entanglements caused or worsened by the involvement of Allen Klein; crises borne of dealings with Morris Levy; and difficulties at the hands of government and/or law enforcement authorities. Also unsurprisingly, there’s an unhealthy amount of overlap among these, if you will, four horsemen.

Brian Epstein is seen by most historians as a hard-working, well-meaning, and ultimately tragic figure who generally did his best, yet who often found himself out of his depth in business matters. His naivete concerning matters of licensing and publishing meant that The Beatles – although we think of them as fabulously rich people – often left money on the table in business negotiations. And the mess in which their management structure was left in the wake of Epstein’s death led directly to two new realities. The first was Apple Corps, a high-minded but ultimately failed business venture run by the group members themselves. (Yes, today the company is wildly successful, but that has only come about in the last few decades.)

The second was to send the group – or at least John Lennon, George Harrison, and Ringo Starr – into the (arguably) evil clutches of Klein. As Baby You’re a Rich Man illustrates time after time, page after page, seemingly everything Klein did for his clients ended up (surprise!) benefiting him to a greater degree. So while he got the group a better royalty rate on their albums, he took a massive cut. And when Apple received promotional copies (records “written off” and designed to be sent to radio stations and reviewers), Klein “sold them out the back door” to retailers, pocketing the illegal profits.

The Beatles’ tangles with Klein led as much as any other factor (and arguably more than the presence of Yoko Ono) to the ultimate breakup of the Beatles. And he’d continue to cause them problems for years afterward, as a seemingly unending litany of court cases demonstrates.

Morris Levy was (cough, cough) “widely believed” to be a mobster, and his dealings with John Lennon – although they started out as friends, same as Lennon and Klein had begun – were nettlesome, to say the least. Those culminated in the Roots LP, a bastardized version of early mixes from Lennon’s Rock and Roll album project.

Speaking of Lennon, he suffered entanglements with Big Brother, first in the form of Sgt. Norman Pilcher of Scotland Yard’s drug squad, and then via harassment at the hands of the Richard M. Nixon administration. Lennon’s long struggle to remain in the United States was foiled at nearly every turn by a corrupt government regime at odds with the former Beatle’s supposed political activism, and Soocher details the timeline skillfully.

George Harrison’s “My Sweet Lord” plagiarism suit is discussed, as are matters connected to the (business) dissolution of The Beatles, something that didn’t happen for many, many years after they had stopped working together. What’s fascinating is the manner in which Soocher weaves all of the disparate threads into a single narrative, where everything is connected.

Baby You’re a Rich Man isn’t an exhaustive look at the group’s legal wrangles, however. There’s nary a mention of paternity suits, or Harrison’s tangles with Warner Brothers and A&M Records, or Starr’s ill-fated Ring O’ Records, or McCartney’s losing the catalog rights to Michael Jackson. And other lesser topics are skipped as well, presumably because they (a) are less interesting and (b) don’t fit as neatly into Soocher’s narrative. But this is no criticism of the author’s decision to leave those subjects out. In the light of the high quality of Baby You’re a Rich Man, there’s reason to hope for a future companion volume to explore some of those other issues. But by that I certainly don’t mean to wish further legal headaches for anyone in The Beatles’ orbit; they clearly have enough as it is: as Soocher notes in his book’s epilogue, as recently as 2009, Paul McCartney’s MPL Music sued ABKCO (the late Allen Klein’s company) on charges of mishandling funds owed to MPL. That suit was dismissed by the New York Appellate Division in 2014. But one assumes we haven’t heard the last of it or similar legal conflicts.

Baby You’re a Rich Man: Suing the Beatles for Fun and Profit is recommended in the strongest terms, not only to Beatles fans, but to anyone interested in the business of being a popular artist.