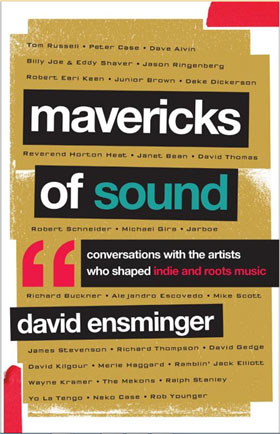 There’s something endlessly fascinating about the creative process. And of course it’s not merely one process; it’s wholly unique for each individual. And because that’s true, conversations with those engage in creative output are often illuminating. David Ensminger clearly agrees: he’s compiled a book’s worth of his own conversations into a volume called Mavericks of Sound: Conversations with the Artists Who Shaped Indie and Roots Music.

A few of these names will be familiar to casual music enthusiasts (Merle Haggard and perhaps Billy Joe Shaver), but mention of the bulk of the artists interviewed will elicit furrowed brows or blank stares from most people. That doesn’t make them any less important; it’s worth recalling how influential artists such as The Velvet Underground, The Stooges, and Big Star were in their days, and it’s helpful to recall that none sold very many records or broke into the mass culture consciousness in a meaningful way. So the fact that the names interviewed in Mavericks of Sound are not well known is no detriment.

And so it is that may of Ensminger’s interview subjects are “cult” or “underground” acts. But to a man (and, much less often, a woman), the acts spotlighted in Mavericks of Sound are about expressing their own product of the creative muse. And nearly all are what one might call critics’ darlings.

They’re also pretty much all excellent interview subjects. It helps immeasurably that in Ensminger they have an intelligent interviewer; in fact he’s often more of a peer (on some or another level) with those he interviews. Occasionally that can result in a somewhat insular conversation, one in which the reader may feel that he or she has wandered into a deep conversation already long in progress. When both of the parties in a conversation are discussing theoretical concepts, dialectics, philosophy and such, Mavericks of Sound threatens to get a bit too egg-headed for the casual reader (present company included). But my advice is to force your way through those heady chats, as even when the subject matter gets a big dense and/or academic, there’s value to be found.

Interviews with Michael Gira and Jarboe (Swans) and Deke Dickerson are among the most revelatory of the twenty-two major interviews, and even the shorter pieces (Richard Thompson, Rob Younger, Wayne Kramer) are well worth reading.

I do have two criticisms of the book. First off, and relevant to the points already made, the lack of contextualization hampers wider enjoyment of the interviews. I understand that nearly all of the material as presented in Mavericks of Sound has been published elsewhere (in ‘zines or other periodicals), and that by definition, readers of the pieces in their original publications would have understood who these artists are and what they’re about. But in a book such as this, containing interviews that have taken place over the last decade and a half or so, it would be helpful if Ensminger had penned a brief introduction for each, with at least a thumbnail biographical sketch.

Secondly, since the pieces are (again, for the most part) being re-published, it’s reasonable to hold the author to a high standard of fact-checking. With that in mind, I ask, who exactly is Brian Seltzer* (sic)? And who is this guitarist Link Ray** (sic)? There are other less egregious errors, but those two – the first of which is made multiple times – are the most wince-inducing.

Ensminger clearly knows his subject, and much much more (a fact that he makes sure to put on full display), and he’s a keen interviewer who (it seems) allows his interviews to follow interesting paths, rather than hewing to a predetermined set of questions. And if one can look beyond the dismissive tone occasionally taken with regard to a handful of other artists who are not interviewed in its pages*, Mavericks of Sound is indeed a bright and wide-open window into the creative process, and is thus recommended.