Book Review: Feedback: The Who and Their Generation 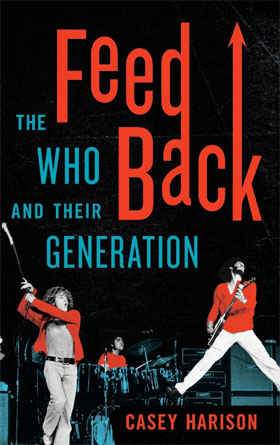 I’ve mused before on these virtual pages about the uncomfortable – and arguably even tenuous – relationship between scholarship and rock music. Somehow the pairing just doesn’t seem natural, even though a significant portion of rock is intelligent, and (I imagine) some scholarly works are at least in part informed by a rock’n’roll sensibility. But in general, the two go together like…oh, pick your own metaphor; I haven’t had my coffee yet. Oil and water? That’ll do for now.

Still, I remain open and receptive to endeavors in that area. And that openness – wise or misguided; you decide – led me recently to Casey Harison‘s Feedback: The Who and Their Generation. This book seeks to place The Who into the author’s context of something he calls “Atlantic history.” For the purposes of his study, Harison constructs a cultural and geographical entity he calls the Atlantic; this region includes the United States (and presumably Canada, though it doesn’t figure into the narrative) and Western Europe (with a decided emphasis on England).

With that basic scene/premise set and accepted, Harison endeavors to place The Who into the context of social, historical, and even political trends throughout the second half of the 20th century. Fair enough, you might say. But he doesn’t stop there: the author widens his historical lens to place that narrative into the context of the last, oh, five hundred years.

What that means in practical terms is that readers find a discussion of Renaissance minstrelsy alongside a look at Pete Townshend‘s guitar playing. Harison draws some very interesting connections – and, you may be glad to learn – avoids making grand, sweeping hyperbolic assertions about The Who’s place in it all. But somehow the whole enterprise feels a bit overcooked, a bit of, dare I say, a stretch.

Based on his knowledge, his writing skill, and his ability to elucidate a point, I have enough respect for the author to believe that the genesis of this book was more than a case of Harison saying to himself one day, “Hey, I’m a history professor with a special interest in Atlantic history. And I also dig The Who. Now there’s a book idea!”

And to his credit, Harison devotes a good portion of the book’s 175 (or so) pages to a survey and analysis of what he calls the “crosscurrents of influence” between the USA and Europe. There’s plenty of interest within that topic, for both the scholarly-inclined and the general rock-fan reader (as well as the six or seven people who fall into both categories, ha), and Harison does not disappoint. He really does know his stuff. I’ll wager that Who fans reading this will learn some fascinating things about the history of the Western world, and that Feedback: The Who and Their Generation will spark new interest in The Who among sheltered academic types. And what’s not to like about those outcomes?