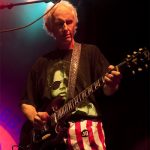 Though his musical skills and interests have always transcended his work with The Doors, at age 71 guitarist Robby Krieger proudly carries on his old group’s legacy. Krieger scheduled a limited run of live dates this spring to do just that. The Doors were one of the most important and influential bands of the 1960s
Read More
With 1/1/15 mere days away, it’s time for Musoscribe’s annual best-of lists. These are – of course — wholly subjective, and reflect my tastes and interests. I viewed quite a few music-related DVDs this year, and while quite a few were excellent (and none truly awful), four stood out. As it happens, all four concern
Read More
Customarily, I take Thanksgiving Day off from posting to the blog (it’s one of very few days in which I do that). In fact I generally write the pieces days in advance, so trust me: I am taking today off with family. But for anyone who tunes in today or after, I present a few
Read More
This feature is based on my previously-unpublished 2011 interview with the late Doors keyboardist. – bk “I used to play in a band called The Doors.” That deadpan, unprompted statement from Ray Manzarek came about two minutes into our August 2011 phone conversation. I had scheduled an interview with the keyboardist to discuss his involvement
Read More