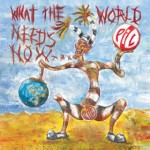 File Next to: The Fall, Killing Joke, Gang of Four It’s been nearly forty years since Never Mind the Bollocks was released; try wrapping your mind around that fact. Back then, the idea that vocalist Johnny Rotten (neé John Lydon) would somehow carve out a career niche for himself would have been laughable. But in
Read More
Not that anyone asked, but we now have an answer to the musical question: what might a Public Image Ltd album sound like without the involvement of John Lydon? The new album Yin & Yang is credited to Jah Wobble and Keith Levene, two prime movers of PiL during its most creatively fruitful period. And
Read More