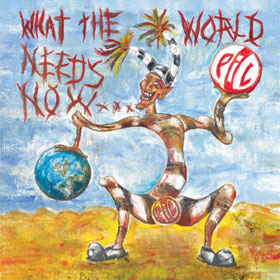 File Next to: The Fall, Killing Joke, Gang of Four

It’s been nearly forty years since Never Mind the Bollocks was released; try wrapping your mind around that fact. Back then, the idea that vocalist Johnny Rotten (neé John Lydon) would somehow carve out a career niche for himself would have been laughable. But in many ways, his post-Sex Pistols aggregations (a revolving lineup usually dubbed Public Image Ltd) were as musically groundbreaking as the Pistols, if not more so. On What the World Needs Now… Lydon shouts insistently while an aggressive band cranks out surprisingly melodic (yet menacing) one-chord jams. The phrasing on “Know Now” is reminiscent of some of the best moments on PiL’s generically-titled 1986 release, Album. Surf-n-spy guitar enlivens “Bettie Page.” Lydon’s caterwauling is a decidedly acquired taste, but the overall accessibility of this disc – combining elements of rock, no-wave, dub and hip-hop – renders it quite listener-friendly.