I’m not alone in my belief that Moby Grape was the Great Lost ‘60s Rock Band. For myriad reasons both internal and external, the group never capitalized on its staggering breadth of talent. But – a certain former manager be damned – when we can find them, we have the albums. Even the least of
Read More 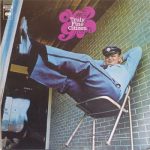 Way back in the depths of the Great Recession (2007-2009), one of my former writers (from my time as Editor in Chief of a now-defunct magazine I won’t dignify by naming) put me in touch with the good people at Amoeba Music. The California-based record chain had an ambitious plan: creating artist bios to serve
Read More
Moby Grape was (and remains) one of those unlucky star-crossed acts that never, ever seemed able to catch a break. From the beginning, things seemed to go wrong for them. They managed to survive the critically disastrous over-hyped debut: while the self-titled album was nearly perfect, the record company’s insisted on feting it with an
Read More